Uhm, since Gokudera has so many great sets of clothing and I wanted to vary them a little more as well... I just wanna list some easier/more casual outfits here or versions I haven't worn that often but which made for some great pics.
(I just chose the Future Arc version as a cover cause I love that pic the most ;) and it feels somehow neglected without a cover -.-)

I will try to update which versions the folder contains:

1. Yukata Fanart
This was the first more exotic although a little altered version I wore to a Reborn! yukata picnic in May 2011. (Originally that day Japantag in Duesseldorf should take place but due to the events in Japan the date was postponed.)
I just call it my "Christmas Tree" due to the colours xD.

2. Choice Arc
Many thought I was cosplaying Tyl xD. But there is a difference afterall in hair style, shirt and all...
Since my Tyl wig wasn't ready this was my improvised choice for our monthly Animexx meeting in Koblenz this August (2011).

3. First Appearance
Spontaneously since I needed a red T-shirt anyway... I just bought the rest together as well and decided to wear this to a small but very funny Reborn! event in Duesseldorf also this August (2011).

4. Future Arc
I had promised Rika aka Juudaime to cosplay something from the future arc with her together at Connichi 2011 (Friday). But since my time was really short due to university stuff I just managed to get the pieces of his normal future arc outfit together (minus his Flame Arrow -.-). But still I love this artificial leather jacket :).
Update: Finally a pic I love and finally I was able to make my flame arrow in December 2011 *-*

5. Trading Card Ghost
Funny Reborn! halloweenevent in October 2011.^^ I guess noone has ever done this weird funny version and honestly I wouldn't have cosplayed it either if I hadn't been asked to participate in a group and [email protected] would have promised to help me with the yukata. In the end I realy enjoyed this cosplay but rather due to the fact that instead of the original voodoodoll Yama had provided me with an unfinished Mukuro plushie xD and well... my inner Hayato had a lot of fun to pay back the pineapple for a statement from the latest manga chapters about his guardian duty.

6. Skyfight
Animexx meeting in Koblenz again this February (2012) . Originally I wanted to cosplay Dino but as the wig proved to be far too light when delivered…. I decided to do this Gokudera version instead to kill my frustration xD. Good thing I rewatched the skyring battle in search of a certain scene with Dino and Squalo in hospital and saw again how awesome Tsuna’s guardians already worked together during this fight *-*. So I got flashed and shopped everything together, took the colours out of the anime and the design from the manga.

7. Bianchi's wedding
Who remembers the "Junebride" chapter from the manga or the "Happy? Wedding" episode from the anime when aneki wanted to marry Reborn suddenly but he was conspicuous by his absence XD?
Well since aneki aka [email protected] got caught by a sudden sewing fever and wanted to make the wedding dress... I decided to join in cosplaying from one of my very favourite episodes.^^ Just got me the shirt and made the remote control and had quite some fun ;) at Animuc 2012.

8. Werecat (Monstertamer Tsuna)
Well, I needed a cosplay for Halloween 2012 and since I had no better idea and had already been thinking about cosplaying this funny version for a year, it became finally reality.
It was very funny to try to make catlike pictures xD. Although it was also very weird to cosplay Gokudera without rings and dynamite o.O’’. There is something missing somehow, although I like my cat ears very much. Happy how they turned out and the tail isn’t bad either, at least very fluffy. Just one thing is possibly really missing: cuteness. Guess that’s simply nearly impossible for me.

9. LM.C CD-Cover
Ok, I have to admit this cosplay wasn’t my idea at all in the first place. But when [email protected] shoved this picture in my face I had to admit I liked this official! overall version much better than these orange jumpsuit everyone used to cosplay back in 2011… -.- Sorry, but they just remind me of garbagemen… Well… and I like bandanas xD and it somehow turned out to be a very funny different feeling to wear them at Cosday² 2013… and I look forward to the day when our Yamamoto joins us.^^ Besides I was really afraid of sewing an overall for the first time. But in the end everything worked out very well.

10. Child – Sleepover
Once upon a time during a skype conversation…. we somehow ended up with this funny strange idea to cosplay the Reborn! characters in pyjamas for children. In other words to go to the con armed with pillows and blankets and to have a pyjamaparty. Somehow we had no chance against this idea and ended up cosplaying it at Animagic 2013 on friday. It was funny I have to admit and Mukuro’s old pink cassette recorder playing Disney songs contributed to this atmosphere even more. It all ended very early though when Dino stepped on a bee and had to go to hospital cause she is allergic against them ^^’’. Still it was a nice day. Funny thing besides: We got many nice compliments from passersby for our beautiful costumes o.O… Guys, we were wearing pyjamas ^^’’ that’s something living in every closet…

11. Venezia Calendarartwork
Also Animagic 2013, but on sunday another Gokudera version became reality… this time the one from that certain official artwork which has got an air of carnival in Venice. (Nice contrast to my pyjama I wore Friday besides xD.) This cosplay is something very special indeed. Not because of the feeling and that someone thought I was cosplaying from Hetalia xD. No, it’s cause it was a very early birthday present ^-^ from [email protected] and [email protected] Just so that we could cosplay together cause they were cosplaying Hibari and Mukuro in the version from the other artwork in this certain style. So I’m really amazed and happy. And I might take the opportunity and ask someone to shoot me in this cosplay in the garden of the castle of my hometown :). 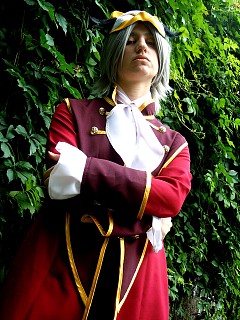 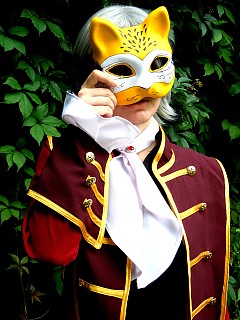 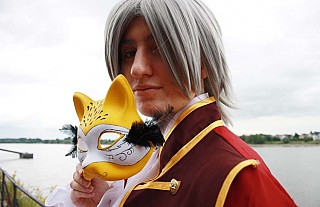 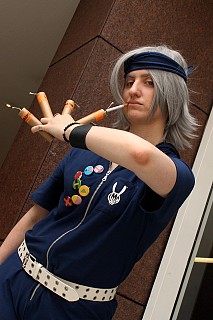 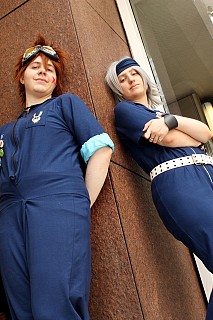 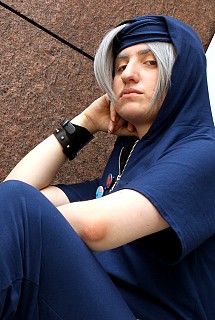 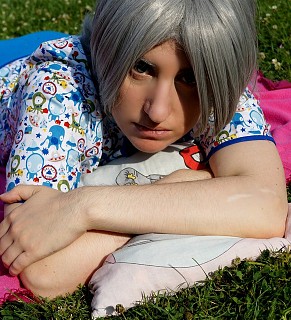 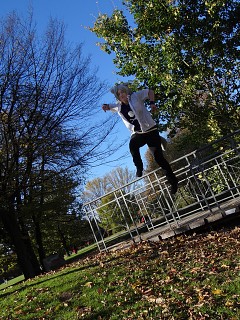 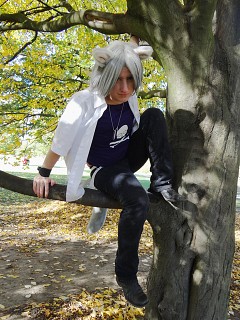 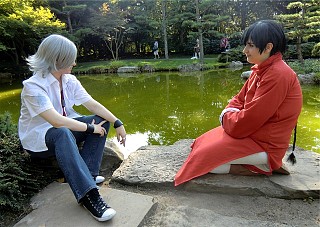 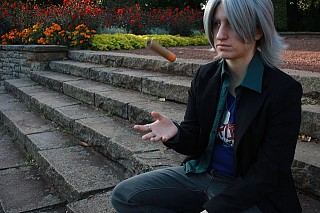 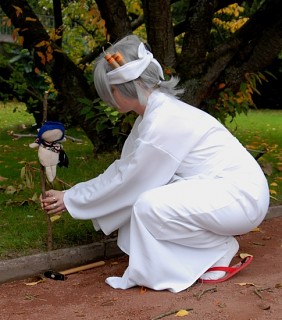 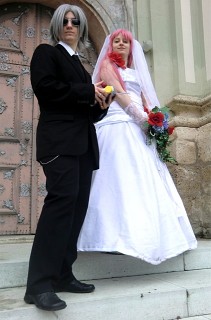 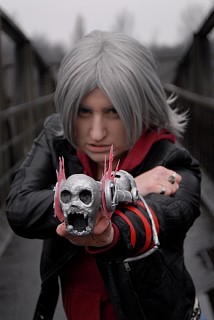 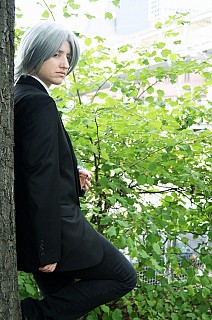 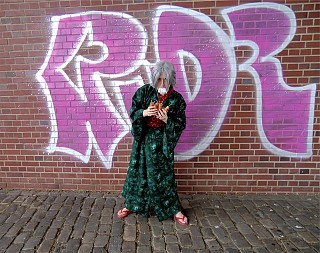 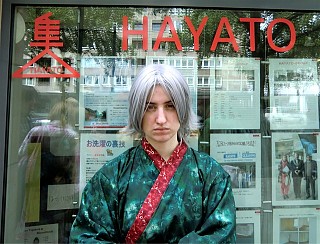