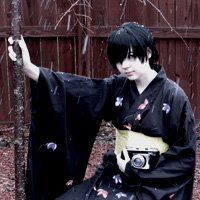 I've just been getting back into Vocaloid and I really wanted to cosplay one again! I wanted a comfy outfit, and my Miku Zatsune cosplay is far from comfortable. ^^'' Then I suddenly remembered Dell! He's one of my favorite Vocaloids and I had planned to cosplay him before, but never got around to it.

The wig came from the ebay store, JC-PUNK. It's one of my new favorite places to buy wigs from. ^^ This is also the first wig I've had that's actually pulled up in a ponytail. I added a clip to the front of the cap to hold it on better. I trimmed the bangs some and layered them, then used a blow dryer and some hair glue to make the antenna/cowlick. ^^

I made the pants myself since I wanted the stripe on the side to be sewn on. I also put elastic around the waist since my goal for this costume was comfort. &gt;u<

The shoes were bought at K-Mart and painted white & Purple. They're so comfy! And they're actually my correct shoe size! 8D

The shirt was easy. Bought from Wal-Mart. lol I wanted to make it but I didn't have the time or money to do it in time for the convention.

The tie was also made so it would match the stripe on the pants. It's a fake tie though. It velcrows in the back. lol

The belt was really tedious, but not really hard. I but a bunch of triangles out of purple and dark purple fabric, then sewed all the triangles together into a long strip, then sewed the strips together to make the belt.

The badge was the easiest! I used the plastic cover that one of my old con badges had been in, then printed out a pic of Haku and a plain grey piece with Dell's name on it. It says
VOYAKILOID
DELL HONNE
code: DTM
DTM is the code that's printed on Haku's arm. One side of the badge has the info page, the other side has the picture of Haku.

The headset took a long time and I'm still not completely happy with it. I used Foamie sheets, Crayola clay, red & blue transparent folders (to make purple together), a plastic headband, and LED lights that are meant to be worn on your fingers like rings. So I'm very proud that the headphones actually light up! ^^