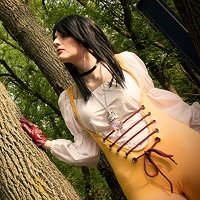 I was really hesitant to make this costume because of a couple reasons... I was afraid that I wouldn't be able to make it and that I wouldn't look good in it. But I was invited by a friend into a group with a Rikku and Paine and I couldn't say no, and I'm glad I didn't! I will break down this costume piece-by-piece to help explain how I made it!

Top
For the ribbed part of the shirt I cut up a tank top I already had (I had to do this twice because I messed up the first time haha) and sewed that to two pieces of fabric that I had sewn together at the sides. I cut in the V-slit in the front and inserted cording while hemming to get the piping look. The middle cord was simply sewn under the hem at the top of the shirt. The Zanarkand Abes symbol was simply made of stiff card stock, painted black and fabric glued to the middle cord. It actually stays on pretty well! There is also a cord that is sewn to the top that goes around my neck under the hood. The lace was sewn on to the bottom of the shirt.

Yellow waist ropes
Simply bought a couple of yards of yellow cording at JoAnn's and wrapped it around and close it with a safety pin.

Hood
Simply used a hood pattern and then added snaps to the front.

Necklace
Made out of sculpy. It's too big but it'll do for now. Attached to a necklace chain.

Earring
I bought this off of someone on etsy.

Armbands
Made out of thick-ish canvas fabric and added grommets (10 on each). Laced up with black cording.

Belt
Made out of felt. Bought the belt buckle at JoAnn's. Added 3 grommets. The metal pieces in the belt are D-rings.

Belt bag
I've never made a bag before but there are a TON of tutorials online if you are lost, but it's really quite simple. Added leather fringe, buttons, and a snap to close it.

Black bracelet
This thing is so ugly, haha. I used craft foam and made a sort of tire-track texture on it with additional pieces of craft foam. I then covered the whole thing with pleather and added velcro to get it to stay in place.

Shorts:
Bought on ebay, but I'd like to get some real denim short-shorts.

Wig
I first bought a ferarri in spanish brown from arda wigs. I straightened the wig and cut off the extra hair for the hair tail. I tried to style the shortened ferarri but failed so I bought a magnum in spanish brown and it's PERFECT for Yuna. It flips out really easily to get her spiky hair look.

Hair tail
I used this tutorial: http://kairi-g.livejournal.com/2188.html Pretty much explains everything :)

Boots
Bought on eBay and then replaces the black laces with white ones.

I think that's about everything... Hope that helps!! 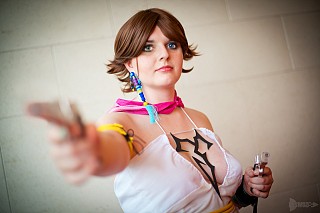