Growing up I loved Sailor Moon, but as I got a little older I loved watching Dragon Ball Z too. I really liked Bulma as a character and back in the day I even ran a small Bulma fansite. She still remains one of my favourite Anime characters to this day. I've been interested in Cosplaying her for years, but I never settled on an outfit of hers to Cosplay mostly because the footwear of the characters in DBZ are a little out of my League to make.

In 2012 I was on a nostalgia kick and I thought why not give Cosplaying Bulma another shot. I came across screenshots of Bulma's first outfit from Dragon Ball and I really liked the design. I thought the pink dress was cute and the outfit had some interesting elements like the glove and the pouch. Once I decided to go to Otakuthon in the summer and with the Cosplay Picnic too, a summer appropriate costume like Bulma seemed like a great fit.

I decided to make the dress using a simple dress pattern. It was McCall's pattern M6102. All I had to was shorten the pattern a bit and it came together pretty easily. The "Bulma" and "97" text were made from cutting out felt and I used heat 'n bond to attach the black letters and numbers to the white backdrop felt. I then sewed the felt to the dress. It gave it a nice dimensional look. I used a belt for the dress that I already owned so it's not 100% accurate, but the belt has a good fit for my waist so I thought it would work ok.

I wanted some fun props for this costume so I bought an acrylic Dragon Ball and a gashapon Dragon Radar on eBay. I picked the 2 star ball since that's the ball Bulma found in her basement and kicked off her interest in collecting the balls to make a wish. I decided to make the blue pouch so it was large enough to hold the Dragon Ball. I patterned the pouch with the pouch that I made for my Rebecca costume as a guide. I wanted to use scrap blue fabric for this project, but I didn't have enough so I gutted my Piplup costume for material. I used interfacing to line the pouch, but it wasn't very strong so I also stuffed the pouch with cardboard. After going to the extra trouble to make it large enough for the Dragon Ball, the ball turned out to be too heavy to fit in it properly. XD

I made the brown gun holster using leftover fabric from my Hitomi costume. I used the gun holster that Pan had made for my Zoey costume as a pattern reference although I think I made it a bit too broad. XD I lined it with thick cardboard to give it proper support and holstered an old gun in it.

I bought purple fabric with a stretch to it to make the socks and scarf and just wiped them up using my shoe and ankle measurements for the socks and my neck for the scarf. The watch accessory was borrowed from my Asuka costume. It was a watch that has changeable straps so I made a red ribbon strap for it. I borrowed Pan's gloves that she had made for her Van costume for Bulma. I think it would have been annoying to have to make it for myself. Bulma only ever wears one glove and everyone kept asking me where my other glove was at Otakuthon. XD

I bought a pair of plain slip-on shoes on eBay to modify for this costume. I originally planned to make shoe covers and I got 3/4 of the way done a shoe before I realized that the elastic stretch on the top of the shoe would get restricted with a shoe cover and wouldn't fit my feet anymore. I wasted several hours working on the shoe covers so that was quite frustrating. As a backup I decided to paint the shoes and just made fake velcro bits instead. I was able to pick up paint at Michael's and I used a fabric medium to apply the paint to the shoes. They ended up being very easy to do and the paint stayed well. I made simple rectangles of fabric that I sewed onto the middle of each shoe for the velcro parts.

The wig actually fell into my lap. I was discussing with my friend Sakura that I wanted to make Bulma and that I wasn't sure what to do for the wig one evening in June while I was visiting her for dinner and she suggested that I could buy an Arda Jeannie wig from her as she had one in teal that she had purchased but never used. I bought it from her that day. XD My friend Pan helped me style it. Originally I was thinking of adding the ponytail clip to make the braid longer and more full and just cutting it shorter, but Pan suggested just braiding the existing ponytail without the extension and it actually worked pretty well. She did all the braiding as I have no idea how to braid and she also trimmed my bangs and the front part of the wig. I love how it looks even if it’s not 100% accurate to Bulma’s design. ! I made a simple red hair bow using the bow pattern I've made several bows out of and I attached it to the wig using a red tie that I sewed around the ponytail band.

It took me quite a while to finish this costume as I got sidetracked by preparing for and going on a trip to Disney World, but I managed to finish this costume with time to spare before Otakuthon and I'm quite happy with the result. It's a simple costume, but it's from a series that I really love and it's a really comfy outfit for summer. Cosplaying Bulma was a really fun choice and I look forward to re-wearing this costume again to future cons and events. (^^) 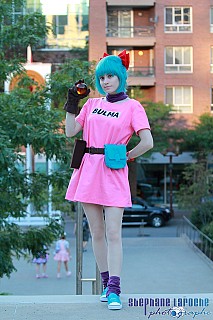 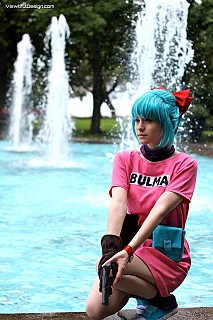 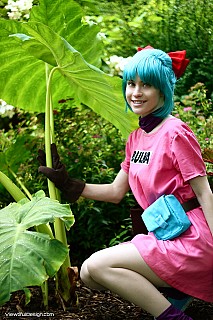 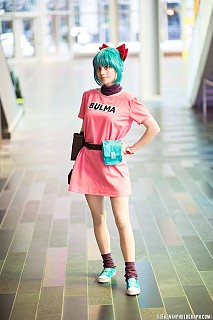