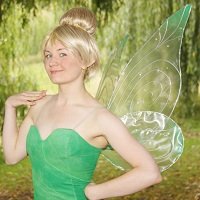 Remake! I kept the wig and shoes with only minor changes, but redid the dress and wings.

I decided on a remake for a few reasons. On my first costume, I had lots of problems due to using a stretchy fabric for the dress - it was a pain to work with, not really suited to a strapless dress and no help for supporting wings. I also wanted to try out new ideas for decorating the dress and I was keen to try to make a larger set of wings. My first set of wings using tights worked out ok, but the tights restricted the size a bit which had always frustrated me. I couldn’t make them much larger due to the size of my suitcase, but I could still improve on the shape by having a shot at another construction method (stolen from Sands!) Finally, I wanted to incorporate lights, mostly for the hell of it, but the idea was inspired by Tink in the Electrical Parade and her assorted fireworks appearances at the Disney parks.

For the dress, I started out the same way as before, making a pattern with non-stretch fabric this time. I used New Look 6468 to make a simple princess seamed dress, which I took in, chopped a lot shorter, and shaped into the sweetheart neckline. Although I love how they look, I gave up on attempting the awkward spiralling seams after too many failed mock-ups and just went with simple vertical seams. After I was happy with the fit of my mock-up, I made the final dress from a non-stretch green suedette. The lining and the outer dress are the same fabric, but I used the reverse, non-suedey side for the lining. The lining has bra cups sewn in and spiral steel boning, mostly encased in the seam allowances but I also used some boning tape to form extra channels.

Then I sewed lights into the lining. I used two 2m lengths of green fairy light ribbon from festive-lights.com. It wasn’t ideal that I needed two sets, because that meant having to hide two battery packs (that’s 4 AA batteries) but otherwise the lights were great. I chose them partially because I couldn’t find other suitable green lights, but also because I thought the ribbon casing would be ideal for letting me sew the lights into the dress. It turned out the lights shifted around too much inside the ribbon and it also proved to be too lumpy. However, it was easy to cut away the casing, and the lights and wiring themselves are tiny so don’t create bumps in the dress. I zig-zag stitched over the wire to secure it all to the lining after I planned out how to arrange the lights. The battery packs had to go in the hem which is the only loose part of the dress - they’re also at the back to keep them as discreet as possible. Makes sitting down awkward though! I sewed pockets into the outside of the lining to hold the battery packs, allowing me to easily access the batteries and on/off switches. The wiring then runs into the inside of the lining through a gap in the seam. I had to spend some time planning out how best to arrange the wiring to get the pattern of lights I wanted. I established I could cut the strings of lights shorter at the ends if required, but I needed the lights to start and stop in places, so used tape to hide any of the leds which I didn’t want to show.

With the lights in place, I could sew the lining to the outer dress. The dress fastens with an invisible zip down the back. I also made a pair of matching shorts, which are essential since the dress ended up veeery short. Oops.

To decorate the fabric, I painted two shades of green on with Marabu fabric spray paint, then braved painting the veins on by hand. I used Marabu’s Textil painter plus fabric paint pens. The pens are designed for use on dark backgrounds and they made it easy to draw the thin lines on neatly. I decided against using rhinestones since it just wasn’t looking right. I might have another shot if I find smaller ones.

I used another set of ribbon lights in gold for the wig, just the 1m length. The battery pack and the extra lights are hidden inside the bun and the rest of the ribbon is visible. I hand sewed it to the wig to keep it in place. These lights are exactly what I wanted since the leds aren’t visible at all when they’re off and it looks just like an ordinary ribbon. The bun safety pins into the wig (because non-permanent methods let me go back and easily fix/adapt stuff) and when re-attaching the bun, I simply I left a gap to allow me to reach the on/off switch for the lights and the batteries when required.

I took apart the pom poms on the shoes, removed the padding I’d put inside them and replaced it with tap lights from a £1 shop. They were then sewn up again and attached to the shoes once more. It means I’d have to unpick them again to change the batteries (and take a look at one of the lights which decided to stop working at AyaCon) but, when working correctly, they can be switched on and off just by pressing them.

I also decided to try out new wings - slightly larger this time. I was still limited by what fits in my suitcase, but managed a broader shape than before by ditching the idea of using tights. I made the outline and inner vein patterns with wire which took me ages and also makes the wings fairly heavy. Some of the wire joins were really awkward and could only be properly secured once I added the clear vinyl backing to the wings. I ordered blue fairy lights from glow.co.uk which are on thin silver wire. They’re discreet enough so I could wrap the wire around the wire frame of the wings. It was my aim to make the lights on this costume only apparent when switched on and I mostly succeeded. The wings are the one part of the costume where the lighting infrastructure isn’t completely invisible when the lights are switched off. At least the lights have tiny battery packs which are perfect, especially since I ended up using 3 sets of the lights (6m in length)! The batteries (and on/off switches) are at the centre back so they slot down the back of the dress out of sight. My choice of blue is because Tink’s wings usually do appear as blue, and besides, they didn’t have the lights in green (incidentally, the lack of green is why I couldn’t use these lights in the dress too, which would have been preferable due to their smaller battery packs). After the lights were in place, I hand sewed clear vinyl with clear thread to the wire. This also let me secure some of the joins required for the inner vein patterns - I used sellotape and also sewed it to the vinyl backing. The vinyl was spray painted with the same paint as I used on the dress and a few rhinestones glued on.

The centre back of the wings slots down the back of my strapless bra and an elastic strap ties around my waist for stability. The wings are too heavy for that alone to be enough, but the boning and tight fit of the dress on top holds them up too. Even so, I had to resort to clear straps for the dress and the battery packs on the wings cause the back of the dress to gape a bit.

I’m pleased with how the painting on the dress worked out and its general construction and fit (even lacking the spiral seams) but with hindsight, I should have made it a bit longer and I need to revisit the lights since the wire for the lights doesn’t hold up too well as the fabric flexes. I made a couple of repairs to it, but gave up on the set at the back when the wire broke again at Aya. The lights also aren’t that bright since they glow through the fabric and I had to be careful to trim seam allowances and avoid areas where the light would be obscured. There’s nothing much I can do about this though short of putting lights on the exterior which I don’t want.

I’m very happy with my new wings and the construction method worked well for me, but they are heavy and I really need shoulder straps, which I‘d prefer to have avoided. I even tried slotting the wings into a tight-laced, steel-boned corset worn underneath to see if I could avoid straps, but due to the battery packs and generally the shape/weight of the wings, they still cause the dress to gape at the back and so stop it from fitting quite right and staying up on its own. 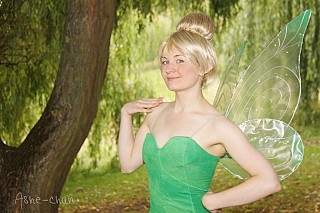 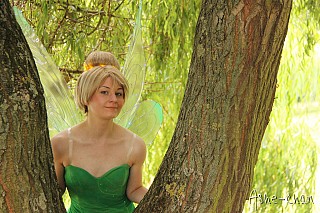 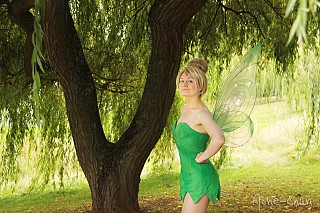 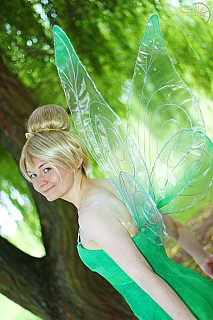 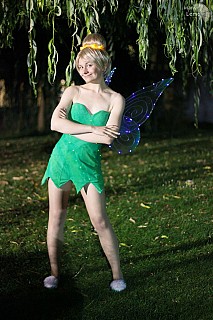 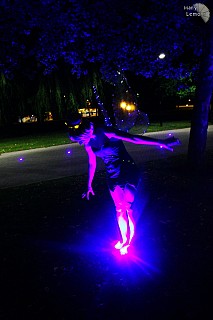 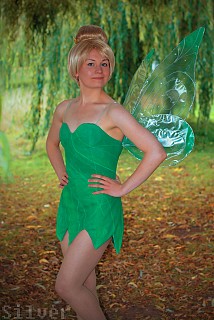 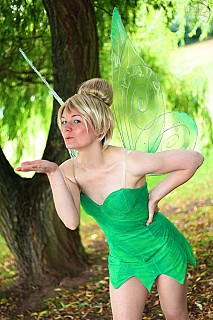 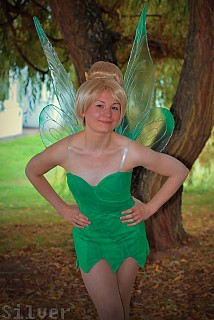 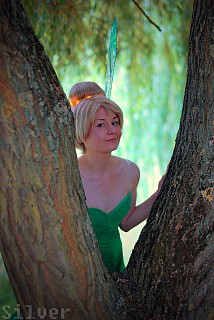 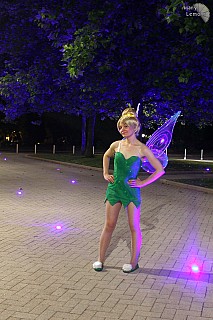 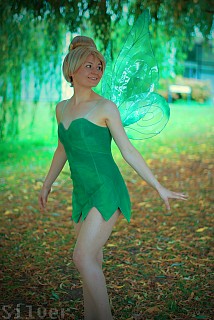 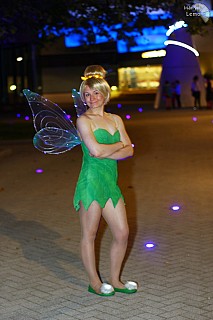 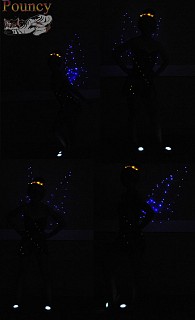 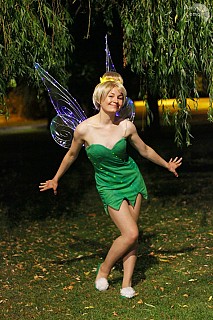 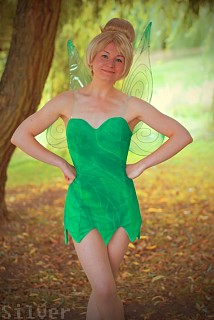 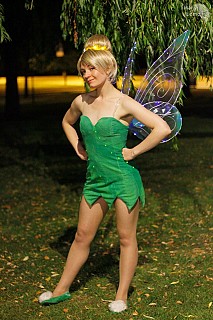 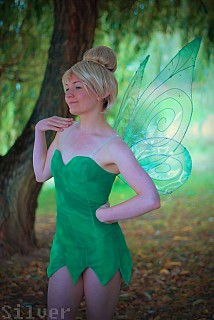 smithers456 I Love Tinkerbell and Faery's in general. Great job with your Cosplay of her. :)

Sephirayne This is an amazing Tinkerbell. Well done. Also, congrats on the showcase.

Hopie You make an adorable Tink!

nert Congratulations on the showcase! I'll never tire of your shiny costumes, especially when they light up ;)

Hilly Ah! I saw this on cosplay showcase! That's so awesome! I miss you tons by the way!

MarineSnow I'm glad one of your cosplays got show cased. The wings are extra pretty!

Shappi I'm so happy its showcased! I loved your Tinkerbell so much. Great work on the wings!

Mohmoh you make a great Tinkerbell. Please share more pictures with us!