I loved the manga, I loved the anime, and I love Teresa <3 She has been on my cosplay list about 3 years now, so I finally decided to do it. :'D Cosplaying a character with nice outfit is great, but when you also like and know your
character, it's awesome~

So, where did I start again? Oh yes. like always, I checked from reference images, if there was some part of he costume where I would've been able to skip sewing. Not because of that I'm lazy. I'm just not so good at it.. :x Oh well. But luckily there was. A lot. Actually the only parts where I did some sewing was on my collar, cape and some of my blade thingies on my waist. My shirt was from my closet, and leggins are bought. (I had to wear 3 of them. White is really revealing color..)

I had a lot of leftovers from my huge slice of fake leather, so I put that in use. Fake leather suits pretty well to make some armor parts, since after painting, it leaves really smooth shine, making it look like pretty realistic. :D There are overall 9 blades around my waist, and all of then have been sewed by hand, 'cause leather was way too thick for my poor machine. (feel bad for my poor fingers too though) Gauntlets are made of papermache, but I used some leather on them too.

The most difficult part was probably my shoulder armor. Round shape was not the problem, since I've done it fem times before, so I knew what had to do. Maybe the problem was on that design itself. The frontside was a lot lighter than my backside. Especially when I tried to carry my sword on my back, and it made my moving really troublesome. I put some extra weight in front, and also cut my shoulder blades a bit smaller than in the original design. It's still pretty hard to move with them, but at least a bit easier.. :D

I haven't made many props during my over 6 years as a cosplayer, so I was quite excited about my sword. Like expected, I saved it for last xD I cut the right sized piece of finnfoamm, and plastic pole, and glued them together, and added some papermache and paint to do some details. That's pretty much it.... :'D 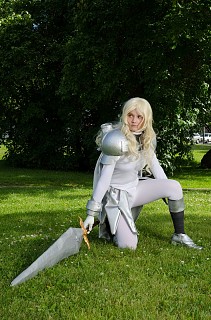 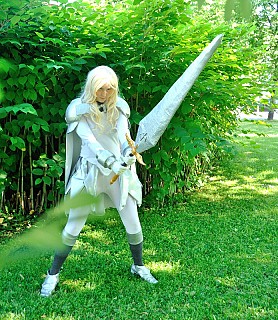 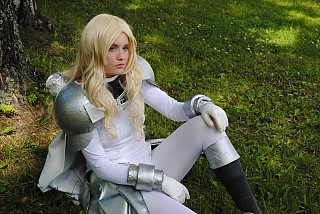 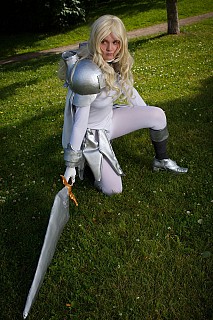 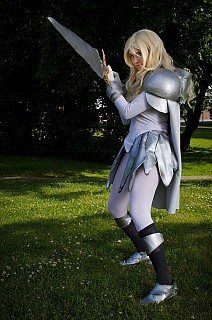 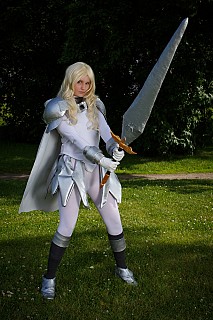 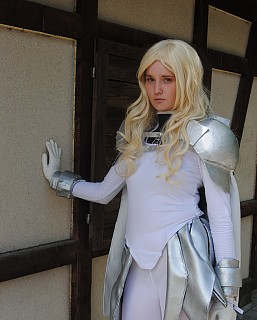 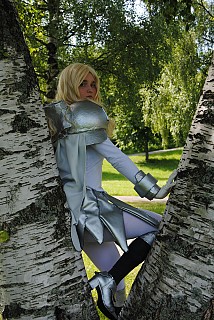