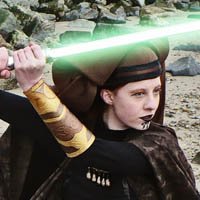 This costume came into being because I wanted to cosplay from The Twelve Kingdoms. Renrin only appears in a few episodes. Namely, she is the kirin who brings Taiki back from Japan to Mount Hou.

The costume is constructed from brocade and synthetic silk-like fabric. I wear it over the under kimono I wear under traditional kimono.

I hate brocade. I hate how it frays and how little strands of it end up all over the place. I completed this costume over a year ago, but I still find little purple fibers everywhere ARGHHHHHHHH. And they stick to my other costumes and clothing...

The wig is a mistake. I should never have bought a 60 inch wig that was not made of kanekelon. Back in September 2010 I could still untangle it, but after nine months of being stored the tangles have gotten nasty (despite the tight braid that I stored it in). If I ever decide to wear this cosplay again, I will buy a new, nicer, SHORTER wig.

You may not be able to see the earrings because they are tangled in my hair, but they are there. They are clip-on due to my not having pierced ears.

I wore this first at Otakumex 2010 (on Friday) and again at Anime Kaigi 2011 (also on Friday). It remains to be seen whether it will be worn again or simply retired. 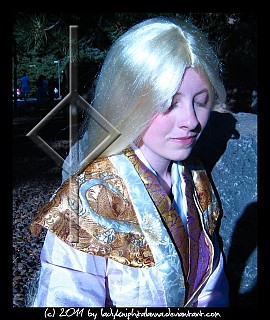 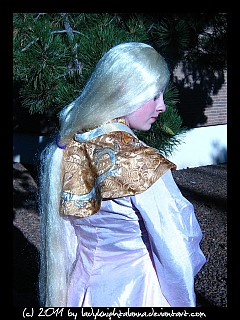 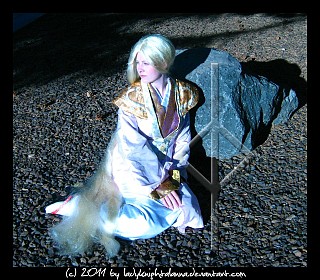 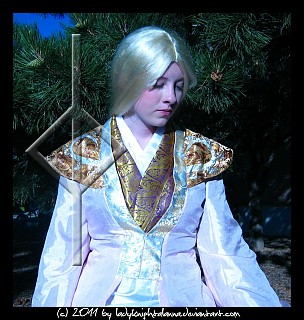 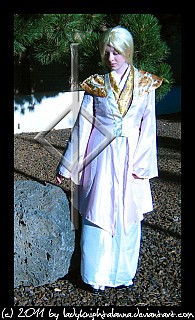