I am a Dahlia fan and when I saw her character design for the re-imaging alot of SH Community people were like WTF and I was like, "OMG AWESOME!"

I knew I had to do the punk rock version sometime. She just seemed like my kind of character. Then I played the game and that just confirmed it. So when Leesers suggested a group at Youmacon, I was all on board!

It took FOREVER to find the fabric I wanted for anything. Purple plaid this summer didn't exist anywhere online or in any fabric stores close to me. (Of course NOW I found it at Walmart last week..) So I ended up buying the skirt from some weird fetish shop online. Its not the right kind of pleats, but once I find the right kind of fabric, I'm gonna remake the pleats. The undershirt I saw at Walmart as well and I was like "OMG TO PERFECT!" So I bought that as well. I dyed a pair of white tights to match the in-game version of Dahlia. After ripping holes into the stockings I used a clear nail polish on the outside of the holes so that they would stay that way and not run to far and ruin the tights. The wig is a Mahogany (104) Magnum from Arda Wigs that I cut and styled.

The gloves were hand made. I've found I really love hand stitching gloves. Weird, I know. The studded wrist band I used to wear in high school (I really thought I was a punk rocker... :P). The other bracelets were some awesome trim I found at Joanne Fabrics. The belt was bought and modified with circle studs. I got the boots from a thrift shop. The necklaces were piece together from Ebay, Ben Franklin and Hobby Lobby stuff.

My favorite part is the gray shirt. I made three different versions of it before I was happy with how it hung off my body. I then put it on a dummy and took two weeks adding fabric paint to it to make it the right kind of glow and emphasis as the game art. (I recommend package taping plastic bags to the dummy before doing all this to keep the paint from getting all over)

The make-up is Maybelline New York Stylish Smokes 06 Amethyst. The nail polish is the same stuff I used for Siam and Pris :P

Thanks again to my Silent Hill "Family" for making this group come true. Thanks to the owners of Silent Hill Historical Society (http://shshatteredmemories.com/) for sending me the Japanese Walkthru Scans to help me with the details of the costume. And a special thanks to Leesers for letting me seduce her wonderful boyfriend over and over again for sexxy pictures! <3 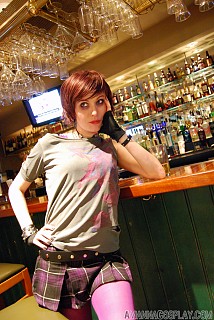 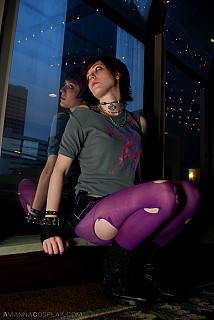 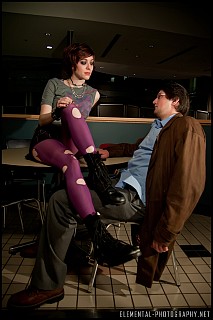 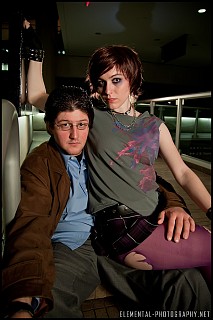 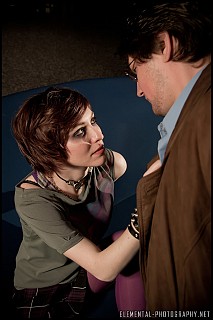 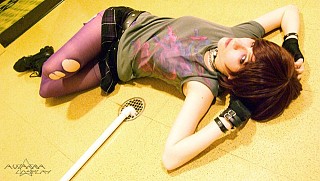 Silent_shadow Hehe, and you are pretty much the nicest of all the Dahlia incarnations in that game! Gah awesome work... I never would have thought anyone would have cosplayed so awesomely from Shattered Memories.

Gummibar I totally loved this version of Dahlia, you got all the details spot on. The wig styling looks excellent. <3 Nice work, keep it up!

Ammie Hottest Dahlia I've ever seen *_* You did such a FANTASTIC job on this costume!!!! You look like you stepped right outta the game *_* AWESOME!!!