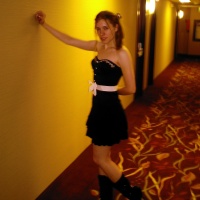 Ahhhhhh!!!! This costume makes no sense! It's so totally unrealistic and very cumbersome, and I wasn't even wearing it! I made it for my boyfriend and it's pretty much all handmade.

Start from the top, down:
Hat was made using an already made skullcap as a pattern. Looks like a surgical cap &gt;_&gt;

Bandana was made, easy peasy

The cape was a modified pattern Simplicity 2499 that I shortened and then added the weird extra cape piece to the back. I also used the stiffest interfacing Jo Ann Fabrics sold for the crazy collar.

The shirt was just a basic shirt pattern I bought from Wal-Mart and I sewed some white fabric on top that was left over from my Cassandra dress. And matching buttons that serve no purpose! The shorts were also made using a simple elastic waistbanded shorts pattern.

The crazy pantaloons were a headache to say the least. I made a pattern with really big paper and then cut out the shape out of chicken wire. Then I crimped the edges as well as put duct tape over all ends so it wouldn’t poke out. It sounds a lot easier than it actually was, as it took me a really long time! After I had the wire frame, I had to cut out the same shape out of the blue fabric and create a “sock”. Then I sewed the sock onto the wire frame as well as putting elastic around the bottom cuff to help hold it up. The last part was to hand sew the silver stripes, which were a pain in the ass because they curve around in more of a wave instead of just a straight line. But, I persevered! I'm not really happy with the silver as it looks really bunchy because i had to force it to curve. But whatever, it's done! I also put some craft foam around some of the edges at the top to help keep the shape. The way I got them to stay up was I sewed one of the pantaloons onto the shorts completely and then I had to use snaps and safety pins to help keep the other up. I definitely need to revise this, as the snaps kept coming undone as well as the pins, poking my poor boyfriend's butt. He wants me to just sew both short legs completely to the crazy pants, but this will greatly reduce my ability to store them, as I can't stack one inside the other.

Overall, it wasn't as horrid to walk in as I thought. He was able to make it down hallways and into the elevator, but stairs were a little bit of a trouble, since he couldn't bend his knee too well. Aside from the slipping of the one pant leg and the wrappings on his arms/legs coming undone, he didn't have a problem.

The staff was another obstacle, as prop making is not my forte. The base is just a pvc pipe that we cut in the center so you can break it down for easy transportation. The fan piece also comes apart from the pipe, and it consists of a wooden dowel frame that we both duct taped to oblivion and then sewed the canvas overtop. The fabric was just a remnant I found at Jo Ann's, but it mimics a sort of raincoat or windbreaker material. 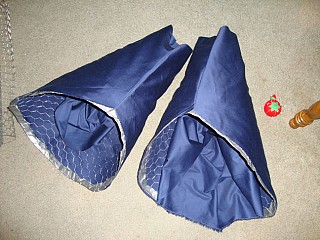 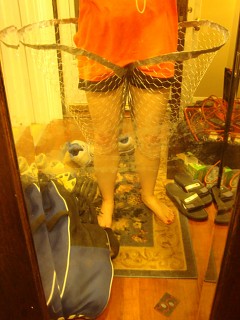 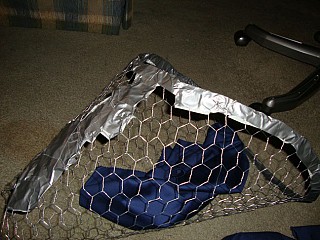 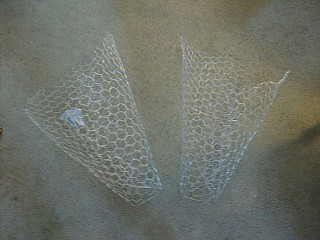 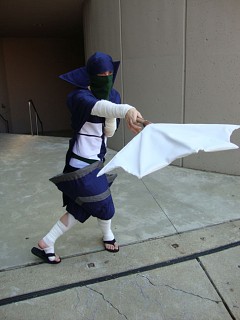 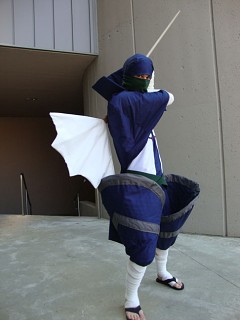 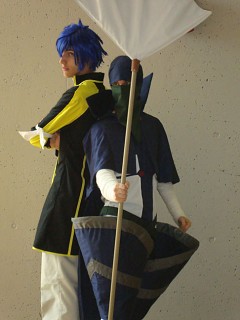 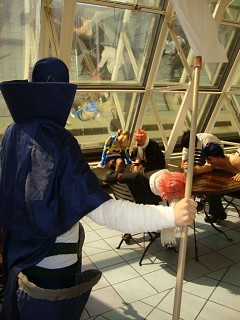 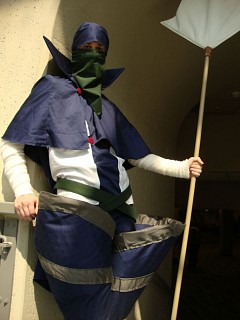