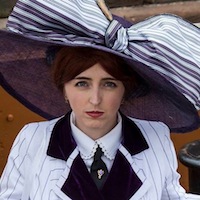 Sarah Brightman has been a muse of mine for many years. Her voice has a wonderful ethereal quality to it but is still warm and so versatile. I love that she continues to make concept albums with strong connective threads that are difficult to categorise into any one genre. Her visual style is similarly strong and always sumptuous, theatrical and fantastical, and I basically want to reproduce almost everything she's ever worn! (Though we'll draw the line at Starship Trooper, 'kay? ;) )

It was Sarah that drew me Repo, and even though I didn't quite know what to make of it at first it definitely grew on me. Chase the Morning is such a striking number and I think the film really hinges around what happens in this scene and the tangled relationships it portrays. And, er, I'm a sucker for big swooshy coats. ;)

Finding the right fabric for the coat was definitely my biggest challenge. I didn't love the fabric used for the real thing and wanted to be able to use this coat again, so I took some creative licence and chose a black / navy print cotton. I drafted the hood (that thing is enormous!) and half-circle skirt to add to a basic jacket pattern.

The belt is wide elastic with appliqued PVC designs and metal d-rings. I also made the sparkly boned bodice (not that anyone saw it! :c ) and a black miniskirt because I hate wearing leggings on their own. The leggings were purchased, as were the boots, though I'm hoping to make boot covers at a later point for more accuracy. Makeup isn't my strong point but I had lots of fun with it for this costume.

The wig is Broadway by Sepia in colour 2, and the contact lenses are by Terror Eyes. I chose white lenses with black rims rather than blue as they better approximated the pale blue of Mag's eyes.

More photos on the way soon! 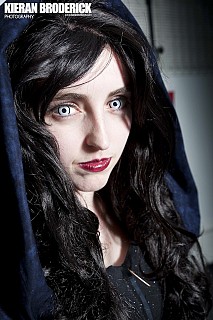 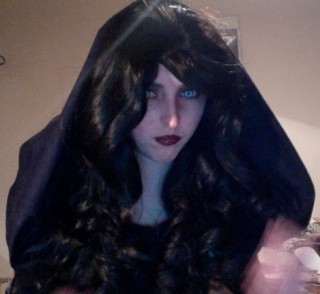