Cosplaying as Shinku has been a dream of mine since I first stumbled upon her design in 2007. I just loved how beautiful her dress looked and all the pretty details on it. Back in 2007 I really didn’t think I was ready to take on such a complicated project, but in 2008 while I was on a great trip to Tokyo, Japan, I picked up bloomers and a giant Shinku plushie with the hope to use them with and as a reference for the costume. I had intended to make this costume for Anime North 2010, but because of a lack of time, I put off the project until Anime North 2011. I planned to start working on the costume in early 2011 to get it done well in advance of the con, but I ran into a lot of roadblocks and I was busy working on my other AN costume project (Saki from Onechanbara) so I didn’t get a chance to work on Shinku until April.

I know there are a few variations of Shinku's costume depending on the source. I decided not to make her Manga version, because I couldn't find black lace that I really liked. I decided to base my costume on Shinku's look in the Anime instead. I wanted to make her outfit from the series because it's the most "simplistic" with a little less detail so I thought it would better match my skill level. I also decided not to make her white underskirt which isn't as notable in the Anime due to the amount of effort it would have taken to make something that's not that visible and would be very costly in fabric. I also cheated with the crinoline skirt and just used one that I bought in Japan that I constantly use with all of my Lolita outfits.

I spent a great deal of money on this costume to get the nicest materials that I could find for it, but sometimes the best looking isn't the best to work with. I spent about $150 on fabric for the costume. The velvet fabric that I used was a serious pain to work with. The fabric liked to pill, unravel if overworked and became airborne fluff when it was cut. It also burned even at very low temperatures. I didn’t realize how sensitive the fabric was when I first started working on the dress as I had been ironing some finished seams and I burned half of the panels of the dress in different spots. It was a total disaster. My friend Pan was kind enough to pick up more fabric for me so I could replace some of the panels that were the most obviously damaged. The fabric liked to pull away in areas when sewing around curves (that is in the princess seams at the front) and when I went back to fix them, the fabric would disintegrate in the seam from being over sewn. My mother really helped me out by redoing some of the more delicate seams when I struggled to get the fabric to stay in place. Sewing this costume was a real group effort and could be a big struggle!

Although you can't see it, I included the black lace detail and small reddish pink flowers on the front of the dress. These details are totally covered by the caplet, but I really like how they turned out. The little flowers were ones my mom actually had for years in a sewing box. It was a really lucky find. I used red flowers for the bodice as my mother only had 2 pink ones. I think the contrast of reds looks really nice (not that anyone can see it). XD

The dress was made using a pattern that was suggested by the Cosplayer Lynleigh. It was created by altering Simplicity pattern 9891. I used the top of a very old pattern of my mother's to give the dress a higher neckline. The caplet was made from a piece from Simplicity pattern 3723. The bows were made using the general tutorial also made by Lynleigh. Her bow tutorial has really helped me out with a lot of costumes. It's too bad her website with her tutorials is now down! The bonnet was made using the bonnet on my large Shinku plushie as a reference. The head of the plushie is so big that the bonnet was almost a perfect fit for my head. XD It was a great guide to work off of.

I bought a ruffler foot for my mother's machine to help speed up work on all the ruffles that are around the costume. The machine I ended up using was my grandmother's which was a super fast machine so my ruffles weren't always even, but the ruffler foot made my life so much easier. XD

The flowers were a lucky find on eBay. One of the things that I felt could really make or break the look of the costume was the pink flowers and I just love how these ones that I bought look.

I wasn't so lucky when it came to the wig. I'm definitely not very skilled with wigs so I opted to buy a pre-styled wig for the costume. Unfortunately, one of the pigtails came a bit uncurled during the shipping process. I also had a mishap with the wig falling over and I had very few options to work on the wig in my house because of the weight and length of it. In the end, a pigtail extension fell out and the bottoms became frizzy messes. I have to really thank Pan-Chan and Louise for helping me fix up the wig prior to and at con. I'm not sure if I can detangle the pigtails using a detangler, but I'll probably give it a shot. If not, I'll have to look into getting a new wig which may mean getting a base wig and clip on pigtails. It would probably be a heck of a lot easier to deal with in the long run!

The bonnet was a bit tricky to make because it was tough to set the pleats in it. The fabric became quite heavy so it had a tendency to droop over my forehead. My mom came up with the great idea to put wire in the very top of the bonnet to hold it up. This worked pretty well at first, but the bonnet still dropped. I need to look into putting more or getting a stronger wire for it.

The shoes were a pair of heels that I bought two years ago when I thought I might Cosplay as Lia from World Destruction. They were a used pair from eBay, but were totally perfect for Shinku. The heel height was a bit high, but all I had to do was add ribbons to the backs and around loops for the closure and glue on more pink flowers and I was set. I already had a few pairs of white tights which I had purchased two years ago for my Maria costume.

I really like how the back bow that I made turned out. I really wanted it to stand up nicely around my waist so I "stuffed" it with foam. My main green bow under my bonnet attaches with snaps to the green ribbon that I made. The green bow is stuffed with felt. I was really worried that the bow would overwhelm my face, but it turned out nicely. I had to redo the tails of the bow once so they would hang down at a nice length on top of the caplet.

It took me well over 40 hours over the course of a month and a half to complete this costume and it cost me nearly $300 to make. It was a real labour of love to finish it as at times it was quite frustrating. I spent so long shearing excess fabric with pinking shears and putting no fray on edges, but in the end, it was worth the effort. This costume did make me realize that I'm more of a casual Cosplayer though. I enjoy the journey and the end result, but only if the costume is easy to plan out and not too complicated. A costume like Shinku can be quite tricky and although the result can be very rewarding, the time and energy needed to make a costume work out can be hard to justify. In the future I'll stick to simpler projects and if I want some super detailed or somewhat complicated to pattern costume I will request a commission.

I do look forward to Cosplaying Shinku a lot in the future though! I think the Rozen Maiden designs are very pretty and adorable and I definitely want to re-wear this costume to several cons in the next couple of years. 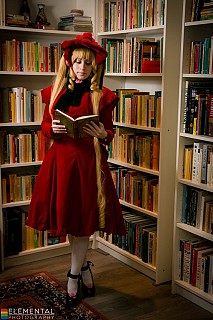 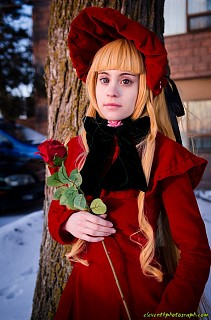 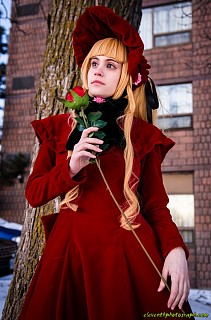 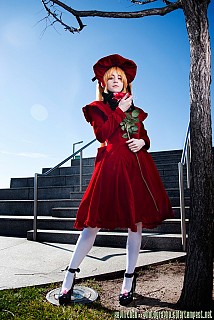 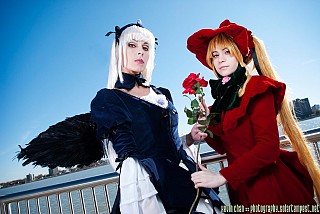 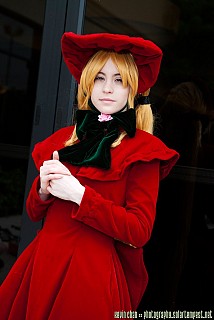 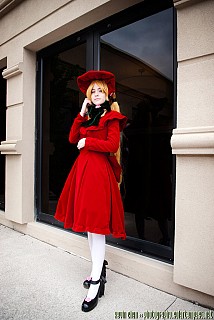 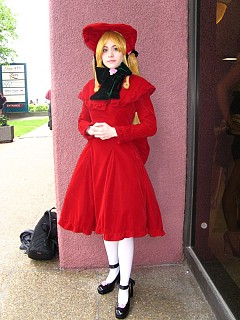 Ammie Man, we really need to get shots of us as Shinku and SuginTou together XD I LOVE how your costume turned out! You look so adorable, your such a perfect Shinku!