It looks like such a simple costume, but I spent 3 months working on it! I tried very hard to capture the details and for once make a garment that actually fits me. The blouse has a fairly tight fit and I achieved that because I used New Look pattern 6338 which was sized for juniors. XD I'm too petite for most commercial patterns and it's super frustrating to adapt patterns. My math skills for calculating proportions is pretty bad. XD I'm glad the zipper worked out, though! I prayed a bit before cutting the top to install the zipper!

The only things that I didn't make were the black leg pouch, boots, the metal plate for the headband, the shorts and the gloves, but I modified the gloves, boots and made a new headband ribbon.

The wig was a cheap one from Aliexpress. I purchased the wig because I wanted one with a skin part. I figured it would be fairly accurate right out of the bag, but of course it wasn't. XD My awesome friend Pan helped me trim back some of the hair around my face and cut the back to a more appropriate length. Eventually Pan will be my Naruto and I'm very much looking forward to that!

I never thought I would jump back into Naruto Cosplay after a decade, but here I am! XD This costume turned out to be a bit of a beast because the fabrics that I used fought with me, but in the end I'm pretty happy with the final result! Sakura is a really awesome character and I'm really happy to have Cosplayed a female character from the series. 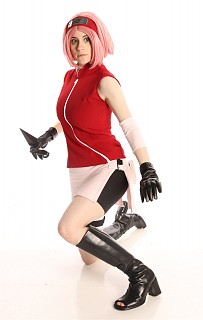