Alice through the looking glass

Made for the opening movie and future events! Love Alice since I was a kid, and I love there are so much versions of her as an adult, because it makes me really happy to cosplay her!

I was to the opening movie in 2010, so I decided I would do the same in 2016! Alice has been one of my favorite characters since I was a kid. I have to take advantage of her adult versions!

I recycled almost every fabric for this cosplay, except the one for the pants, the golden one of the collar and a piece of the orange shirt. But almost everything I bought were ribbons, fabric paint and flowers!

The hardest part was the jacket. I spent like 3 months searching for trailers and screen captures until I found some images in which Alice was not wearing her collar and the jacket was opened, or else I wouldn't be able to make the jacket. It is a typical chinese jacket, in fact, but with flower like sleeves. In fact, she had two pair of sleeves: short and long. The shorter sleeves were a bit hard to pattern. I had to make a normal, short sleeve pattern, then cutting it in diagonal so I could make it with the center opened and crossed, each side over it. The long sleeves were normal, and opened from the wrists to the elbow. The back of the jacket was easier, just two sides sewn in the middle, and both are opened in the center of each side, from the lowest part until the low waist. The front side was harder to make, since it is crossed in diagonal, just like the chinese shirts and dresses. It closes with big, black pressed buttons. The neck is opened in the front. Every border of the jacket has bias tape sewn on and every aperture has red rat tail cord sewn on too (front and back apertures and both long sleeves apertures).

The neck and the borders of the short sleeves are actually painted with green and blue fabric paint. I had to paint two layers or else the fabric absorbed almost all the colors. I had to paint this part because I was not able to find small embroidered leafs to sew on them. Since it is a very small detail, it doesn't look really bad.

Under the jacket I'm wearing an orange silk shirt. I made the pattern just like the back side of the jacket, so it was easy. I didn't want to use a zipper, so I did a round, opened neck and added more centimeters to each side. This way, the shirt is easier to put on and out.

The collar was really fun to make! I used a thick plastic, white on the inside and golden with scales on the outside. It can't be sewn, you just can use staples or glue on it and cover them the best you can. I made the pattern for the three types of petals: small, medium and big. The coloured parts are a bunch of left overs of elastic silk I had stored through the years, of different colors: yellow, red, fuchsia, blue and green. I did patterns for that as well. I glued each coloured piece behind each golden piece. I also did a straight necklace with the golden plastic, glued some velcro to close it on one side, and stapled each finished petal on it: first big ones, then medium, finally the small ones. The drawings on most of the petals are made with different type of acrylics: normal brown and white and 3D golden. The buttons were partially recycled and decorated with the golden 3D painting.

Now the pants! I used my hakama pattern, the same I used for Chizuru, but I did the pants like 5 cms shorter, since Chizuru's hakama is too long. This was a bit difficult, since I had to pleat everything, iron the pleats from both outside and inside, using a special spray product for it, then cut each orange ribbon, pin them up and sew them, one by one. It is closed by one side with a green zipper, properly hidden with the purple jacket. I also used the golden 3D painting to paint each dot on each ribbon. I had a pain in my wrists when I finished this off!

For the boots, I used two beautiful fabrics (black and white) that my mom had stored since the 90's. She is the kind of "I'll buy this fabric, then I'll do this beautiful skirt!". Then she doesn't and I end up using them for cosplay...xD. They are some kind of crepe silk. I used white and black felt inside of each piece to maintain the boots stiff, and black velcro on one side of each boot so I could remove the boot cover off. It does even has a sole! For the patterns, I first traced the form of half of the boot. Then I drew the black and white parts, wrote what was what in each piece, cut, traced it on the fabrics and sew everything together. I also decorated one side of each boot with beautiful, small white buttons. The boots are super funny because they have the same form than the karate shoes!

Because my main source for the reference images were from a Disney exhibition of the dresses of their movie, I realized they had made a red bag for the dress, so I did! This way I could pack my things inside of it. I used some red taffeta scraps and red satin ribbons to make the bag.

Another thing I made, although I won't use it until I do the private photoshoot, was a small, beautiful hat. It was made with orange felt, orange tulle, black and fuchsia feathers and and purple and orange flowers, everything sewn by hand. I painted the purple flowers with more purple painting because they were too pale, cut the petals to make them rounder and the pistils to make them shorter. I also sewn two hairgrips under it to pin it up to my wig. But Alice only uses this hat in some missing scene that was not in the final movie. I'll have to wait for the extended version to see it, or maybe they never included this in the final product. She uses the hat when she looses her colorful collar. 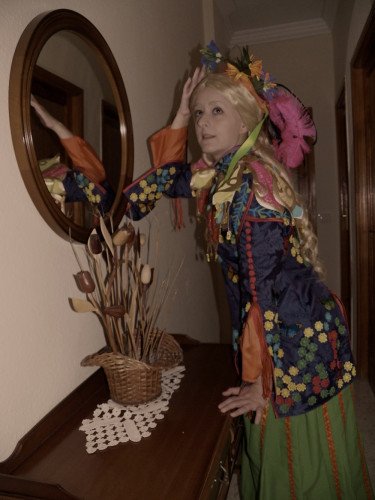 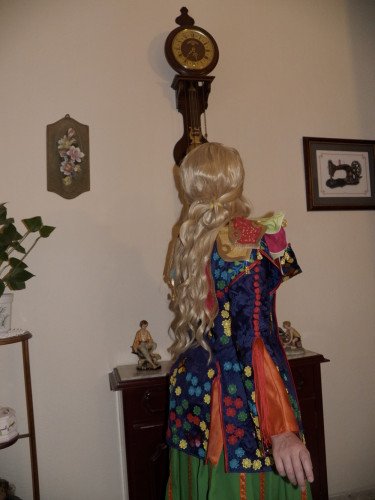 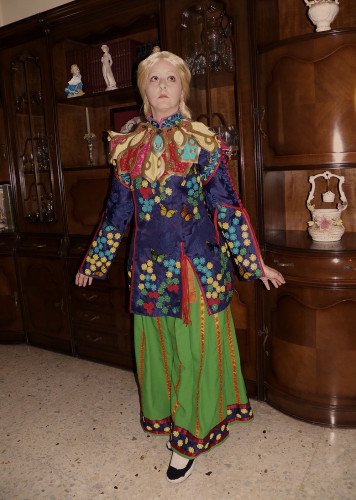