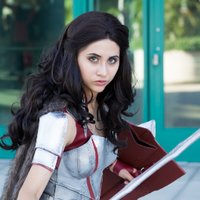 Lara Croft: Tomb Raider 2013 // aka the costume with the most components I’ve ever worn

The Tank Tops: The white tank top was previously owned, but I believe was bought at a store like H&M. The blue tank top was bought at a store called The Closet and was originally a bright turquoise. They were then soaked in a mixture of permanent marker ink, rubbing alcohol, and water to give it a basic weathered look. The rips were then put in with scissors and my hands. Then I made different mixtures of opacity of the ink water, some were watered down acrylic paints that I then applied for the desired effect with a rag soaked in the nasty water. The was originally just fake blood but I didn’t like how it dried into a strange pink so I used a mixture of black, brown, and red acrylic paint to keep the blood looking, well… bloody.

The Pants: The cargo pants were a second hand store find. They were purchased at a place called “Plato’s Closet” and were a size too large but I just wore a brown leather belt (already owned) like Lara does in the game and sewed the thigh seams for a better fit. The rips are made just like the shirts were, by hand and with scissors but were then frayed with sand paper. They were weathered, aged, and distressed with the same methods as the tops but the only difference is that I used spray paints as well on the pants so they were crinkly like in the game so it looked like they were matted with dried mud.

The Boots: The boots were yet again another thrift shop find. They’re made by Ecco and are incredibly comfy and are built to last. The scuffed and weathered toe on the boot is just from day to day wear (whoops!). Ecco does run on the more expensive end, so I was lucky enough to find these at a thrift shop. Any brown over the ankle lace up boots will do though.

The Bandages: I have a grand total of 8 bandages on my body for this cosplay. The bandages on my hands are very long strips of white fabric that were weathered like the tops and had fake blood drizzled on them. They’re wrapped on my hands just like boxers would have them. A tutorial on how to wrap your hands can be found if you just search it on the internet. The other bandages are placed in the same places as they are in the game. One on the upper arm, one on the thigh, and one on either ankle securing the pant legs. The bandage on my knee (where she skinned it) and midsection (where she was basically skewered at the beginning of the game) are just gauze bandages soaked in a mixture of water, food coloring (every color in the little kits you can buy anywhere) and very watered down acrylic paints. The blood on them is just a mix of acrylic paints.

The Climbing Bar/Pick: Was made entirely out of foam core board hot glued together in three layers. Then painted the right colors and then weathered and aged with more acrylic paints. The bandage looking handle grip she has on it is just masking tape that was then weathered to looked bloodied and dirty. The studs are just drops of hot glue painted and weathered with the rest of it. The blade broke once during my time at the con because I accidentally bent it while holding a bunch of stuff but it was easily fixed with some superglue I kept in my bag for emergencies and later hot glue for a stronger hold/

The Bow: Is literally just sticks tied together. I cut three branches from a tree in my yard and then bound them together tightly with masking tape. I then hot glued strips of weathered white craft foam to use as the bindings that are on it. I then bent it and strung it with a plain white chord (which with not stretch but somehow manages to loosen it’s shape so it just needs to be tightened after every weekend I wear it due to it being stretched over my body.)

The Quiver: Is made out of a couple layers of canvas reusable grocery bags in a neutral color like beige with old table placemats used as an interfacing. The raised/piping parts on the outside is just thin, stiff rope that was snaked into the tube-like space left for it. It was weathered and distressed with spray paints and the scorch markers were made with a lighter. The strap is just some webbing I had lying around and ‘USMC’ was written on it with a just a permanent marker. The clasp is just something I had lying around from an old bag.

The Arrows: Are just thin dowels painted to look gray and aged. The fletching (feather parts) is craft foam that was textured with an exacto-knife and dry brushed with some white paint then hot glued on.

The Holster: Is craft foam covered in leather that was then weathered with black paint. The studs are just drops of hot glue painted silver and weathered with the rest of it.

The Necklace: Was hand sculpted by me out of polymer clay and then baked accordingly. Then it was painted in different shades of green that were blended together to give it a natural stone look (I was going for something similar to a dark jade) and then sealed/glossed with an acrylic gloss spray. It’s very durable.

The Wig: Was something I bought off eBay a while ago. I don’t have the link anymore but it’s a plain brown cosplay wig that was tied back in a low ponytail. I trimmed the side and the bangs a bit and then they were swept outwards with hair straightened then sprayed in place with Got2Be Hairspray (I love this brand of hairspray for use in cosplay wig styling).

The Makeup: I did normal makeup like Lara had before all the craziness went down and also some contouring to aid in looking a bit more like Lara. But the bruised, bloodied, and beaten makeup is really something I just freehanded. I knew she had a slice on the bridge of her nose and also blood coming from her hairline from being bashed on the head multiple times. The rest was really just a “Let’s see how this goes.” It was kind of last minute when I bought the makeup and you could spend a ton of money on getting the really nice stuff that the professionals use but I got the “Family Value Makeup Kit” from Party City. I know, I know, I was really apprehensive to buy from party city because they are notorious for their cheap quality but I had limited options and it was my last resort. So I bought it. And behold it wasn’t as awful as I anticipated it to be!!!!! It worked just fine for what I wanted to do. I also used a Makeup Setter Spray over it from the company “Mary Kay” and it stayed pretty much the entire con. I just had to freshen up my blood a little bit maybe once or twice the entire day.

If you would like any tips or advice, or just want something explained more in detail about this costume, please message me or contact me! I would be happy to help you if I can! 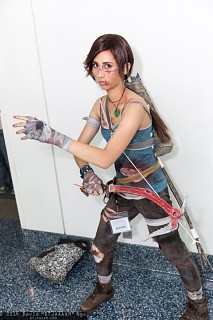 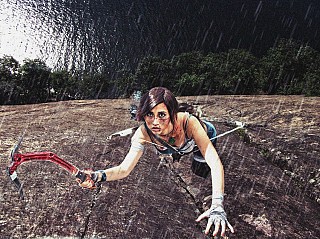 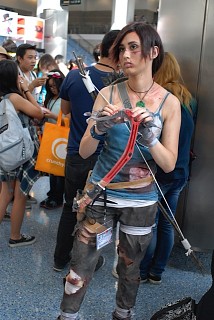