Well, I finally pluck up my courage and upload it.

A very spontaneous and crazy cos at first indeed. (I mean never thought I’d try to cosplay a Chinese about 6’4 (1, 93 m) ^^’’ tall guy. So for obvious reasons it can't be perfect. ;))
Originally I’d in mind rather to go for Lavi anyway. But when I asked some fellow D.Gray-fans and cosplayers which char might suit me and the answer was Komui… I couldn’t resist since he is my absolute fave char afterall xD. I just feel associated with his messiness, (seemingly) laziness and coffee addiction. And besides the first time I was wearing the not even finished cosplay it was nearly like wearing my lab coat afterall. xD
I also love that he hasn’t just a funny but also a serious side that he switches to if the situation commands it. (In fact he has so many traits that I will be busy for quite a while if I only show one at every con I wear the cos.^^)
Apart from that it is very much fun to look after my sister(s) at conventions. *grin* As if I don’t have enough of them in RL XD. But I also enjoyed these funny more or less inchar conversations with Cross at my first time wearing this, why ever.
Besides another funny fact is that I don’t need to wear glasses in RL and later found out from the character book that this baka doesn’t need to wear glasses either (at least for his eyesight)… So I had to wear these although I don’t need them at all cause he wears them although he doesn’t need to wear them either…^^’’

Outtakes:
First time cosplaying him: Just that my hosts and fellow Bleach cosplayers besides kept teasing me the whole morning before the con that I surely had to be Ishida Uryuu from Bleach... (Ok, the glasses, the white clothes, the black hair...) So to prove them wrong at the con I grabbed me an Ishida cosplayer and naturally had to take some I-am-not-Ishida-pictures... Just at this instant a Mayuri cosplayer passed us by voicing the comment: "Oh, two quincies!" *mission failed* ^^' 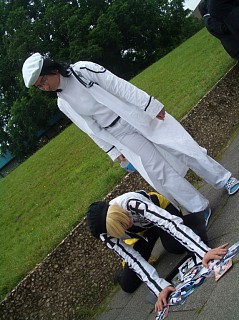 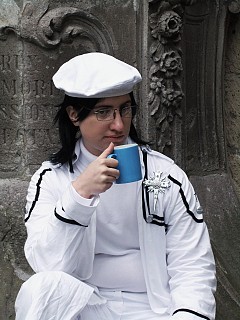 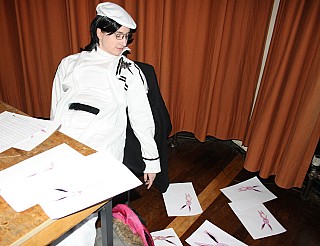 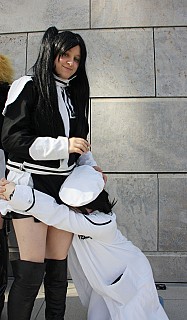 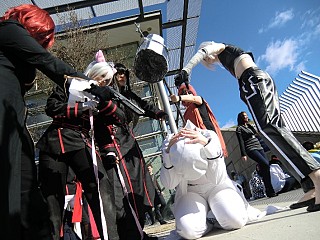 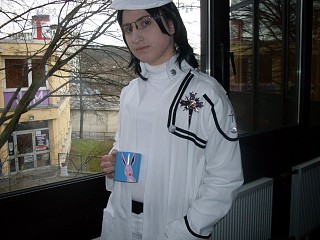 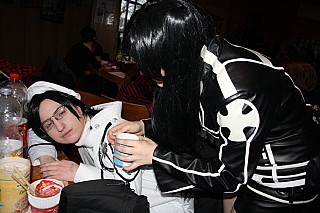 Quinn the Shiki I never see cosplays of Komui, let alone one this awesome! You freakin' rock for this!