I remember being enchanted when I first read the first Harry Potter book a year or so after it was originally published. The series was fresh, fun and put an exciting spin on school, growing up and added a little magic and wonder to the world. I enjoyed reading each book when they were released and seeing the movies. I'm not a huge Harry Potter fan, but I do look back at the franchise fondly. For a couple of years Pan, Sakura and I played around with the idea of Cosplaying from Harry Potter and portraying the main trio. Back in the fall of 2008, I believe, we almost bought some vests, and shirts from Sears to use for Harry Potter costumes. The idea was shelved, but Pan never really forgot about it.

In the summer and fall of 2010 with the upcoming release of Harry potter and the Deathly Hallows Part 1, Pan's love for the franchise was reinvigorated. She decided to make classic robes for herself, Sakura and me so we could Cosplay as Hermione, Harry and Ron respectively. We looked for white dress shirts so we could all have matching shirts and we were able to get really nice shirts at Smart Set.

Pan's attention to detail when making the robes was really impressive. I just love the way she made the sleeves and hood and the fabric she picked for the red lining was really pretty. A lot of people thought we had store bought robes because the job she did sewing them looked so professional. It was really an honour Cosplaying with her.

Pan ordered ties for us online. They're actually youth sized ties because we're so short that adult ties would be too oversized on us. I used my own black dress pants and Pan and I swapped shoes since she has a nice pair of black lace-up dress shoes and I have a great pair of mary jane shoes.

We're still lacking sweater vests because we would like to order them, but the online store we want to order from is out of stock. When they come back into stock we'll order them so hopefully that will be later in 2011. Pan made the amazing wands we used as props using paper, spray paint and random things to stuff them with. They looked really great in person. Pan's prop work is pretty awesome.

When we wore these costumes to the Harry Potter and the Deathly Hallows Part 1 movie premier Pan didn't have a chance to finish Sakura's and she didn't have time to come so only Pan and I dressed up for it. Since I'm not really a big Ron fan and we didn't have a wig for it, I switched to being Harry instead. I borrowed a wig and glasses from Pan. She also drew a scar on my forehead. I personally much prefer Cosplaying Harry to Cosplaying as Ron. Since Sakura was going to Katsucon and Pan and I wanted to re-wear these costumes at Con-G 2011 the same weekend, I again took on the role of Harry. I still need to find a proper wig for Ron so I'm on the lookout for that. It was a lot of fun Cosplaying as Harry. He has a lot of angst to deal with, but he's still a rather endearing and warm person. It was great doing a photoshoot along with Pan with Rock nam Lee at Con-G. Pan is great at portraying Hermione. I look forward to re-wearing my costume to the final movie screening. Hopefully by then we'll have our vests and we can do a shoot as the complete trio. 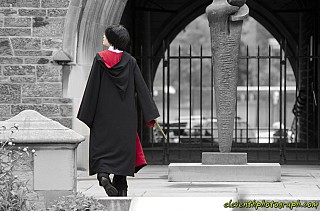 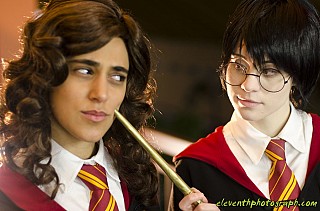 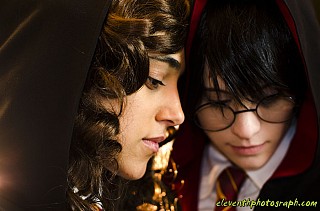 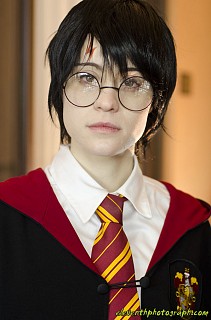 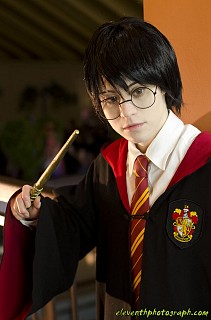 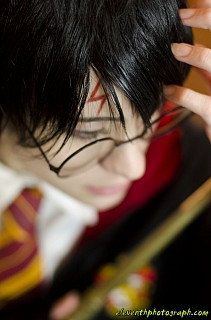 Liliana You actually look just like Harry Potter. ^_~ You are PERFECT~!

Ammie It's amazing how well you pull this character off *_* You are a FANTASTIC Harry Potter!!!!!!!!!!