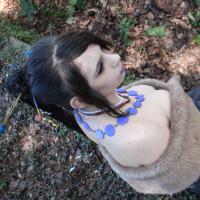 -The pattern that I used for the dress was Kwik Sew pattern 3400. It was very easy to put together and is really easily brought in, if made to big. It is also simple to modify, which when costuming is a nice bonus. Made of charcoal grey medium weight cotton. To make it stay pooffy, I bought a crinoline from good-will, cut out the front part, and made a black slip to go over top, which I sewed to the dress.


-The only thing I didn’t make was the corset, which my sister made for me. The pattern she used is Butteric #B5371, view E, heavily modified. Made of heavy-weight black canvas, grey bias tape, rigalin boning, eyelets, heavy weight fusible interfacing and a light lining.


-The fur thing was not made with a pattern, I just eye-balled it. Made of fake fur and lined with the same cotton the dress is made of.

-The sleeves were just eye-balled as well, made of the same cotton.


-The hardest and most time consuming part of this costume was the flower designs on the bottom and middle of the skirt and the sleeves. What I did first was I drew out the designs on parchment paper in pencil, traced out in sharpie, and then copied it onto a light fusible interfacing. Then I painted on the interfacing with fabric paint. After it was all painted I ironed it onto the dress and sleeves (if you do this, you need to iron it on with the dress fabric facing you, as the paint will melt to the iron) I then cut out all the non-flowers that was sticking out the bottom. To make sure the fabric didn’t fray I traced out the outer edges with crazy glue. (It worked really well and helped prevent tares) I’ll post the patterns I made later.


-The belts were surprisingly easy to do. I made about half of them, the other half were bought at good-will. I reinforced the very bottom belt, the top belt, and two crises-crossing belts with excess boning to help hold up the other belts. I used vinyl for the ones I made, and A LOT of hot glue. Hot glue is also how I attached the belts to the dress. It worked really well. I hot glued the belts to each-other so they didn’t slip or droop.


-The necklaces were easy to make, but very time consuming. The pearl one is beads bought at the craft store, necklace fixings and thread. The other two are beads I made of sculpy, necklace fixings, thread and paint.


-I used my real hair and a clip on extension which I braided and wrapped around it’s self. It didn’t want to stay up so I had to hot-glue it in place. The hair beads are also made of sculpy, and held in place with elastics.


-Now onto the hair sticks. Truth be told, I wasn’t going to make these. I was so done with this costume after all the painting, bead-making and belts, I wanted to be done. But, as my friend pointed out, I would have been disappointed with myself if I went 98% of the way just to give in. So, I made them. Two of them are made out of a coat hanger, some sculpy, safety-pins, and paint. One of the others is a wooden paint brush, sculpy, paint and jewellery wire, the last is an actual hair stick, sculpy, paint, jewellery wire and bells. I really like how they all came out. I’ll post close-ups soon. (the last one was lose though.) 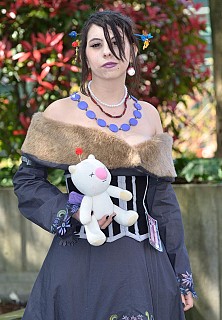 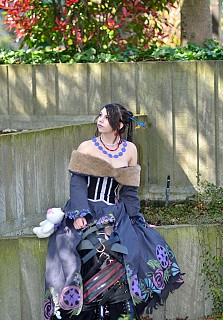