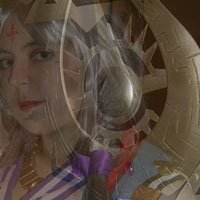 This costume started when a friend of my said during a discussion on fabric types, "You know what would be awesome? Silk Sailor Senshi."

To a Sailor Moon fan there can be only one reaction to that statement which is "HELL YES!!" I am also a huge fan of SeraMyu and PGSM and love how they took the 2D costumes and brought them to a 3D world.

So this was born. All of the fabric is Silk. The dress and cape are a silk velvet, the sleeves and collar are silk dupioni. One of the problems with silk is that "white silk" is much more of an off white. I didn't think it mattered until I got my shoes which were a brilliant white. Compared to that my silk looked yellow. So I got to learn about Optic whitener! It's a harsh chemical with a lot of safety warnings on it but WOW does it get your silks white.

(Also nothing says "Hi new neighbors!" like sitting out on your balcony with a bucket, a stick and a face mask)

Because I am insane, and had just bought an embroidery machine, I decided I needed to have a pattern embroidered all over the cape. There's 3 months of my life I will never get back. There is a feather design running up each seam of the cape and along the bottom. There are several crescent moons on the cape as well with a flying heart fill. I don't know how you can sum up Sailor Moon any better than crescent moons filled with flying hearts. (Also I had a stain and needed to cover it with something shhhh)

From there I started work on the dress. Since I had such a dynamic cape I needed something to bring it together in the outfit. That's where the embroidered feathers and the embroidered rainbow came from. When one piece is embroidered it may look cheesy, but it everything is it's a unifying feature.

The broaches were particularly difficult. I started trying to resin cast them and every single one of my tests worked perfectly. Then of course when I went to do it for real every attempt led to failure. I decided a different way to get the 3 dimensions I wanted would be to use a regular plastic ball and a mirror on the back to reflect the crystal inside. It didn't look quite right so I added the circle of pearls on the inside to make it pop even more.

One more piece about the dress. Sailor Cosmos has a form fitting dress with hard pleats that come out of NOWHERE. I refused to add seams up and down the dress so instead I cut slots where each of the pleats would go and added HEAVILY interfaced gores for body. Even with interfacing velvet doesn't want to hold a pleat. Each of the pleats is spot stitched in several places to make it hold its shape.

Last but not least: the staff. It's PVC pipe with foam and plastic balls. The large white ball on top is hollow and is currently holding wiring for lights that broke on the way to the convention. The details on the staff are stickers I found in the scrapbooking section of my local craft stores. Everything that isn't a support pearl is a sticker. The reasoning behind that was one of the main tenants of SeraMyu costumes: "Is the bedazzler out of jewels? Then it isn't done yet"

In the end I hope I was true to the source even with my own take on it. I did have fun wearing it, even if the shoes cost me more than the silk in chiropractor appointments. 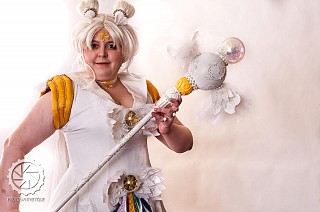 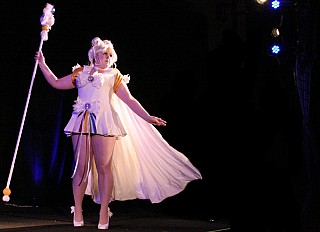 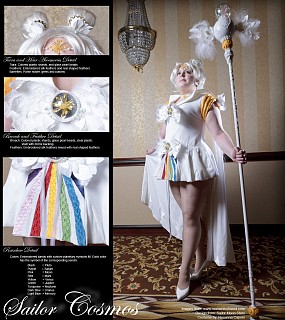 Brightworks I just have to say this: You are so beautiful in all your cosplays but this one, this one I really envy. I've loved PGSM my entire life and just now have I been able to realize my dream of making a costume from it but your Cosmos is something at should be Showcased. I could gush for some time over how much I love this but I'll leave on this note. You are amazing and don't stop doing what you're doing.