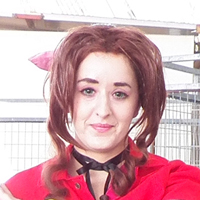 For this cosplay, I bought 1,5 m of light pink gabardine, 1 m of light red tergal, 5 m of dark pink cotton ribbon at the cross, 2 green and 2 red big carnival rhinestones for the weapon (so, she has 2 summons and 2 magic spells) and 4 packets of 6 silver buttons. The wig is the 37 € wig from Ayanamisatoru's original website.

In order to make the dress I took my measures, divided them by 4, translated them to patterning paper, cut the paper, traced the paper twice in the fabric and cut two pieces. I did the same for the back. The only difference is that the front pattern has a V neck and were cut into two pieces, while the back one is straight and I cut it as a whole piece. I sewn the two parts of the dress (well, three, since the front one needs to be opened) and then sewn the dark pink ribbon around. I also used the dark pink ribbon to make two shoulder straps so the dress would be easy to put on. I sewn lke 9 buttons by hand and I did the buttonholes with the sewing machine.

For the jacket, I modified a pattern for a jacket I did in 2014. I took the front and back patterns, traced them again in a new pattern paper, then I took the measures of the height of the sleeves and the body so I would get the desired form. Then I shortened the sleeves and the height in order to look like a short jacket. Once the patterns were ready, I traced them into the red fabric, cut, and sewn everything together. Aerith's jacket looks like it is a denim jacket, with certain buttons and a certain pattern in the stitches. So I drew all the lines with a fabric marker and then sewn on them, tracing the pattern, with black thread so the jacket would look like the original FF7 artwork. I sewn the buttons by hand and the buttonholes with the sewing machine. The neck was patterned and sewn on after I finished the jacket itself.

For the golden bracelets, I used some felt left overs and did 6 bracelets (3 for each hand), covered them with golden imitation of suede left overs and sewn them together (3 for each one). I used a silver press-button to close them around my arms so they don't fall off.

I also made the boot covers using felt and an imitation of suede. But the color was too light, and I couldn't find the darker shade. So I dyed them with brown fabric tint. Once I took measures, made the patterns and traced everything on fabric, I dyed everything and put it to dry. Once dried, I sewn everything on, sewn black elastic to adjust them to the boots I was going to wear and sewn black velcro in the back. I also made a stripe with the fabric which I also dyed, since Aerith has one on her ankles.

I made the staff with the thick cardboard sticks that the fabric stores throw to the rubbish when each stick fabric runs off. I choose different sizes so they could fit inside each other. I used a long one for the center and a shorter one cut into to for both extremes. I also cut a lot of foam stripes, two circles and some rectangle pieces with a hole inside and glued them along all the staff to make the different relief pieces. Once everthing was assembled, I painted everything with syntethic silver painting and added the rhinestones in the wholes of the rectangle pieces. Since the rhinestones are flat and the staff was round, I only could attatch them by using these typical sewing silver pins through the small holes of the rhinestones and used a hammer to push the pins inside the staff.

Finally, I recycled a brown basket my mother was going to throw off and synthetic white flowers painted in yellow with yellow acrylics and water mix. I attatched the flowers inside and around the basket with adhesive translucent tape, since the basket has translucent plastic inside, so they won't fall off.

I also styled the bangs with gelatine leaves and a hairdryer and did a beautiful pink ribbon for her hair with the left overs of the light pink gabardine. I bought a translucent small ball and painted it inside with synthethic painting, mixing blue, white and green. That is the sacred matter she wears on her hair in the game. I also used a thin, black, satin ribbon for the necklace.