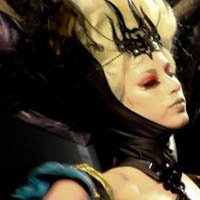 I've always loved that outfit of Esther, and I made an attempt at doing it about 3 years ago. However, I was a true beginner as far as sewing goes, and I had always thought "one day, I'll try to do it better". And so I was very happy to make a second attempt at Black Esther

For a costume like that one, you need: 7meters of black velvet, a few of meters of white duchess satin (left overs from a previous costume), 15m of golden gallon, 20m of golden ribbon, around 10-15 meters of pearls, 3m of lace for the neck ruffle, 2m of guipure for the collar, a bit of very very hard viseline.

One of the "difficulties" was to make the sleeves, as there are 3 sorts of sleeves on the costume :)
But overall, I can strangely say it's not the hardest costume I had to make, I really enjoyed working on Esther :-) and the costume isn't finished yet, so I'll try to make all improvements I can for the next time.

Thanks to all of you who will read me, and good luck to everyone who would want to attempt a TBcostume :) 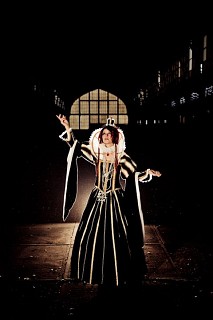