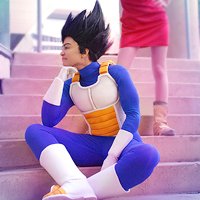 Finally I cosplayed Ranma again! Ranma has been my favourite character for so long, I wanted to do another upgraded outfit for ages (...since I got better at sewing...).

The wig was from ebay in an apple red colour. It’s got a mixed fiber so it’s more flattering on my skin tone. I debated on putting a wire in the braid but I eventually just left it as is. It’s much easier to make sure the pigtail is always visible this way.

About the outfit; even though Ranma wears a male shirt, I tailored mine to be more feminine because you can usually clearly see his girl-form’s figure no matter what he wears when he transforms. I chose the green outfit because I made a red shirt variation a looong time ago and I wanted to make a different one this time around. Also, I really liked having a hat.
The hat was purchased from China on ebay. Originally it was much darker in colour. I tried to dye my fabric to match it, but unfortunately my store only had one discontinued packet of the dye I needed, and I didn’t have time to order any, so the fabric turned out lighter than I wanted... I airbrushed the hat with a mix of yellow/brown/green to make it match closer to the fabric. The hat was sewn onto the wig so it wouldn’t fall off.

For the pants I added a drawstring and a piece of elastic in the back of the waistband. I installed pockets. The pant legs are straight; I just tie off the ankles with the white bows to get the silhouette.

The shoes were purchased from H&M at the mall. White jersey fabric was glued on to simulate a white sole. The bottom of the shoe was hotglued/duct taped to protect that fabric & clean it all up. 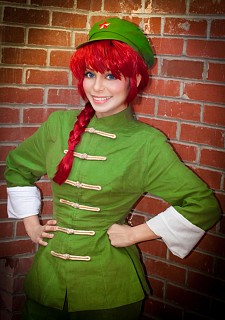