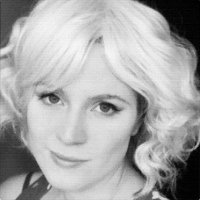 Forearm pieces have been completed and shoulder pieces have been cut out. Photos to be added later. Have determined that, in addition to making the suit of armor, I will be making a breather mask and/or helmet.

Finished most of the armor last week. All that remain to cut are the elbow and knee pieces. I need to do a second layer (possibly a third) of spray paint over the whole thing, as well as finish the wiring. To etch things, I used a wood carving tool. I'm quite amazed that neither Brittany (who will be my Liara, once we finish our costumes) nor I died from toxic fume inhalation, actually.

I have a decent amount left, but I'm pretty over the hill here, there's not much left to do that's going to take nearly as long as shaping/carving/gluing/lafhlejfhelkafjelakjfa everything else. Long update, my apologies.
I should go.

February 21 update:
yeah, it's been a while, shut up. I've been working on a joker costume for my boyfriend, as well as helping brittany (girlieshoes) with her liara costume and directing a play, ta-ing a class, and playing the mass effect multiplayer demo, which I'm fairly sure is the greatest thing in the history of gaming.
anyway, I ordered my bodysuit and EL wire on amazon today, after weeks of searching independent sellers etc. It was easier, cheaper, and will be getting here tomorrow, so wooo! go amazon!
this weekend, I want to finish sanding and painting, so I can try this thing on. I can't wait, you guys.
two weeks. only two weeks until the game release.

28 Feb
Did the last three layers of paint, painted the stripe, attached elastic, and did minor touchups. All that's left is wiring and wearing.


Woo! Finished it! Probably going to practically redo the entire thing (did you notice one of my shoulders is upside down? yep.) at some point but first I really seriously need to get some other projects done, so I'm going to take a break from being Shepard outside of game :) 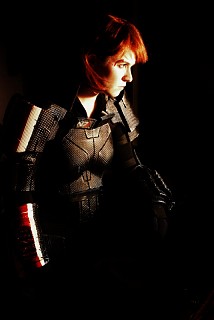 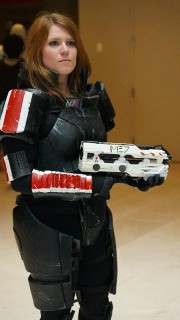 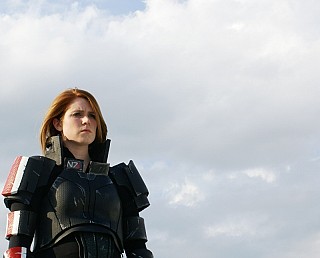 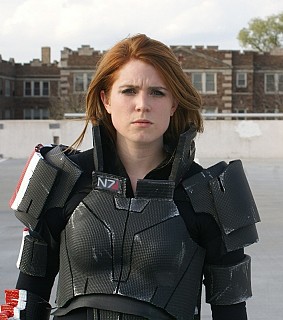 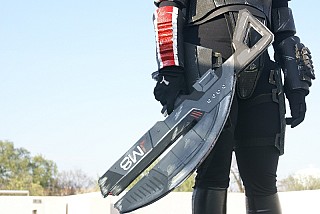 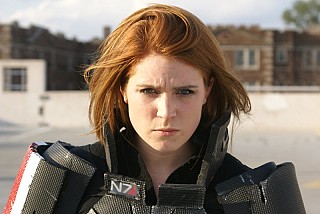 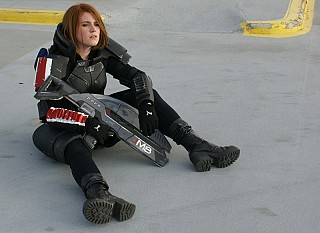 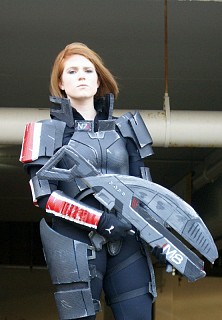 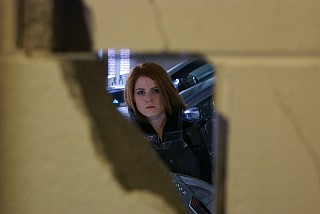 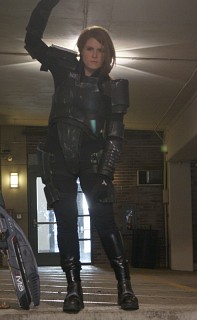 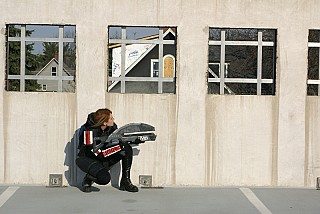 L337JLH Great job on this costume! Great detail and care.

MorningSkye This is awesome. I've been pretty intimidated about trying out N7 armor but your photos somehow make it seem less daunting. :D

Arctic-Sekai This looks great- I'm beginning my own N7 armor shortly and this is truly inspiring!

Hissora This is so great! You have the perfect face for shepard too x3

Screech Bell Yours costume is very impressive too! Great job!

skulldouggary Nice! It's so cool to see how many different ways people make "armor". Your costume is top notch!

TheNyru This is amazing :) one of the best I have seen whats been the trickiest thing to do on the build?

gmcleod You're inspiring. I want to try something like this.

neozero How are you shaping it? And what are you sealing it with??

NSHoss What kind of foam is that?