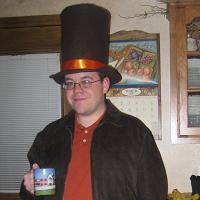 A friend talked me into this one, and to be honest, I've always liked the poor dope that is Roger Wilco, space janitor, even when I first played his games as a kid. I also did some research and found out that almost *no one* has cosplayed as him. Of course, it may be difficult for people to recognize him, too.

The majority of this costume is bought. Boots were the same as my AC doctor (I love them, and I swear to you I will work them into as many cosplays as possible). Gray khakis I was hoping to get a little lighter, but apparently no one wears gray, so I had to take what I could get. Purple shirt I was also hoping to get a little lighter, but again, beggars can't be choosers. Wig is a "surfer dude" wig, which is about as close to dull ordinary blonde as I could get.

The overshirt is a creation made with the help of my dear mother. Well, I helped in getting the fabric and the pattern, but she was the one who put it together and bound it. Took about six hours altogether for her to finish so she's getting a nice present from me for this, and I'm becoming committed to learning how to sew myself so I won't have to rely on her.

As for the props, I wanted to employ a mop that didn't look too ordinary. I actually hope to get a "Fantastic Mop" which A) has all these yellow floppy parts to it, and B) can collapse, which means it can travel. That's going to arrive sometime after PAX East, so I'll take something a little different since I can easily get it to Boston.

I'm also employing that Space Quest IV Hint Book you see me passed out under. Seemed very Roger Wilco-esque not only to cheat, but to also totally half-ass it by falling asleep while reading it. Furthermore, the hint book is an actual item *in* the game, so I felt it a good thing to use. I don't plan on travelling with spray bottles, though. Cuts down on mobility, ultimately. 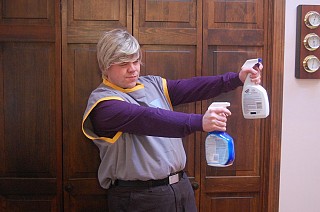 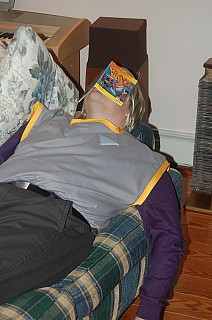 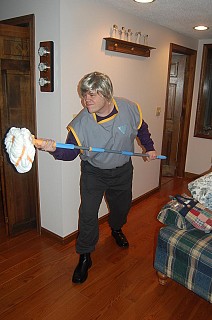 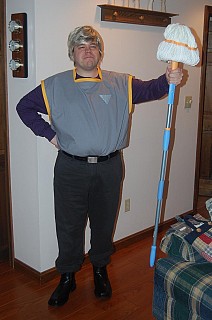 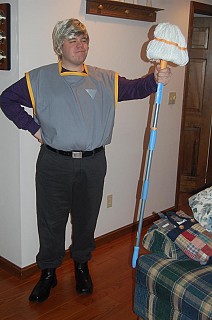 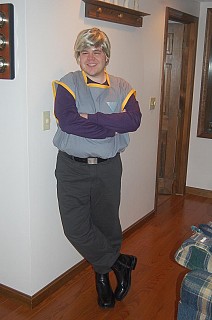