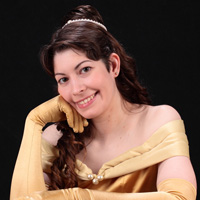 I first "cosplayed" Rainbow Brite when I was in first grade. My mom made me the puffy 80s costume from a Halloween pattern, and I loved that costume so much - she even made the wig out of yarn!

Years later, my friend Tamlin mentioned that she always wanted to cosplay Shy Violet, one of Rainbow's friends. While my personal favorite from the show was Indigo, I don't have the skin tone to play her, so I decided to be Rainbow Brite instead.

This costume was so much fun to put together. I finally had an excuse to use the shiny holographic spandex I'd always drooled over. The pattern based on the Green Pepper ice skating dress (aka the Sailor Scout pattern). I made a blue leotard and a blue skirt out of shiny spandex, and added skirt trim out of while holographic spandex. I sewed the trim on with a zigzag stitch using a clear, iridescent thread, and it's just about invisible.

The arm bands are rings of spandex with quilt batting inside. I didn't make the full leg bands yet, so I have blue "legwarmers" with a while ring at the tops. The shoes are red pumps that I added glitter star stickers to.

The belt is like harness more than just a belt. The shoulder pieces are attached (and I took some creative license with the shoulders, making them white instead of blue - I thought it pulled the white parts in the outfit together that way). The belt laces up the back so it's adjustable. The belt structure is heavy interfacing with the fabric sewn on top, and the rainbow/star design is also interfacing with the fabric glued around it.

The wig is a Jeannie from Arda in Light Blonde (which is a bit orangey, perfect for the character), with a curly clip. I styled the bangs and side pieces using hot curlers, because nothing else would work!

I found "star sprinkles" candy at the Galleria Dallas. I love carrying these around and giving them out to people. I've only had 2 people flat-out refuse the candy - one was a Spartan from 300 (I guess with that body you can't eat candy), and one was a Star Wars Stormtrooper (can't eat through the helmet).

This costume was fun with a group, or alone. I felt like a "guess your age" game, since people of a certain age or older knew and loved me, while the young'ins didn't really get it. I love the cuteness and fun of this costume, and I'll definitely be wearing her again! 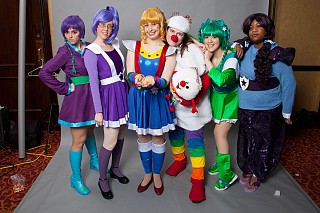 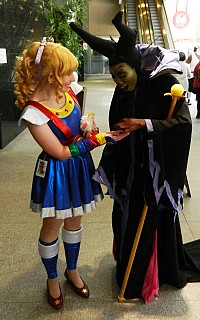 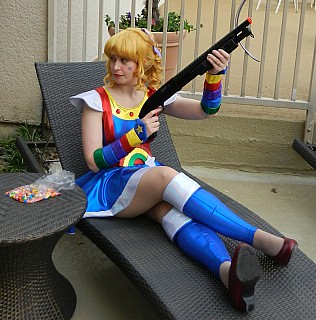 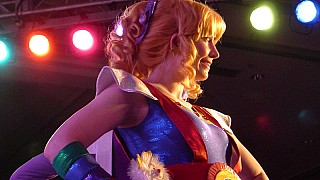 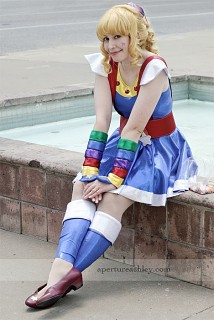