This is a request of Jose, for the XIV Salon del Manga de Barcelona. I don't have photos with my camera.

Later I wore it to Salon del Manga Tenerife 2009.

And I had a photoshoot done by Mery in August 2015.

Gaara was so hugable when he was little! I feel so much pity for him. Well, he is always hugable xD. I decide to made this version to get along with Jose, who was cosplaying the 12 years old Gaara. That, and the fact that I would look a bit weird wearing the adult version xD.

The costume was simple but fun to make. I made the trousers with knit-silk mixed fabric. I bought some of the same fabric in beige to make the shirt, which I gathered in the right side as Gaara's. I made the poncho with a strange sack fabric in brown color, and made the collar stiff with a fabric similar to felt inside. The leg protectors were those I made for Itachi. I used my dear teddy bear plush (it even has a sad-frightening music that get along with the character very well xD) and bought the red wig and the green contact lenses. But my favorite part of the costume was the make-up. I used a special stick for making drawings on the body in black color for the eyes, false blood and brown eyeliner for the love kanji. I covered my eyebrows with white eyeliner, a stick of cream make up in skin color and powder.

It's fun how people can be scared when I put some brutal make-up and anger faces, along with a sad-child-frightening music from the bear, and how can I be unrecognizable like this xD. 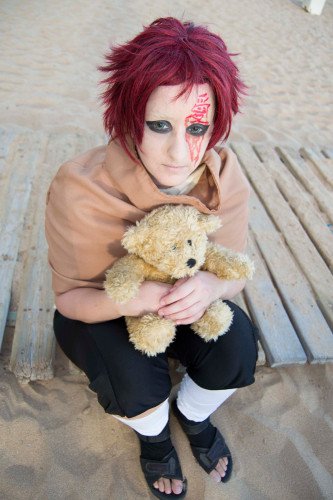 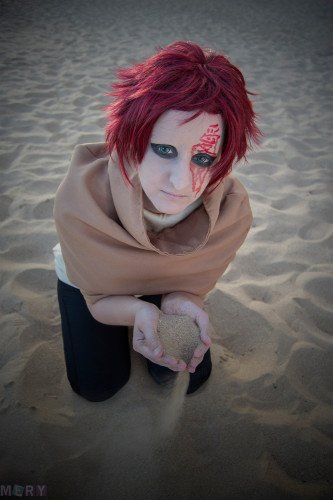 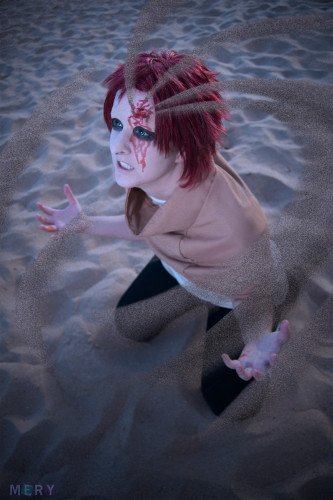