Ok so yea this outfit took me about 2 weeks to make roughly under terms of finding the right fabrics and stuff and I had to use a different fabric for the pants so if I was all over the place like whatever my pants wouldn't rip. So typically I did the whole thing from scratch no patterns used whatsoever. At first I was thinking like "hmm how am I gonna make this thing and put it together and what not", so then I just started on the easiest stuff first and work to the harder parts.

I started on the shirt first. Now the shirt was interesting because I got to make it a reletively long shirt so my little tight butt pants were covered but they weren't that "tight" to begin wit anyway but yea. So yea I make the shirt in a typical fashion but while I do that I also put the white pieces and stuff on the outside before I sewed the shirt together. After I did all that and sewed it together I knew typically that I'd have to take it in and do stuff to it but because everything was already sewed to it I didn't wanna overkill then you can't see the details and stuff. So I used the ol pleating system where I took it in at 3 ends on both the front and back shorter on the front to make room for my chest which I had to flatten down wit the sports bra -_= but not only did this help me out greatly but it also gave the shirt a decent frame and shape to it. They're pretty easy to do I don't know why I never though of them in the past /heh The collar was limp as all my collars seem to do that /swt but yea it wasn't really symetrical so that might have had a play in it. Meh it was still functional I guess, it was just really limp.

So then after that I moved to the next easiest, the hand bracer things or whatever you call them. Since it was still being sewn in black I didn't have to go from one thing to another because chaning the bobbin is so annoying <,< but anyway those were made as typical. I just made 2 rectangles basicly /heh then put white in it ;p When it came to the red that tied them together I had to think what would be good wit that. Because at first I was gonna make them elastic but after the elastic got messed up and looked really crappy I decided why don't I take and do it wit a button? That I feel was a better idea for it because then it wouldn't be all scrounged up and stuff like wit elastic. But then my thing was being able to get it on because they were fitted so the things weren't gonna move around and stuff, but then most people have to have help when it comes to putting something around there wrist. I usually manage on my own but I do pretty good wit that. I was able to make fuctional buttoning wrist thingies so it was easy then and if I needed to I could roll them up when it came to using my hands or something.

So then there were the arm peices. Lovely little craps I'm surprised there were no circular incidents. I had to make them so tight so they wouldn't fly off my arms. Usually when I make things like that like in my orignal project, I make a string so if I were walking normally or whatever then they wouldn't just fall off. They fit perfectly though they were just tight if I bent my arm or something. They were ok though and I put the white stripes on the top which was also good to tell from the top to the bottom and what not. So now that the top was taken care of now there was the bottom half of me.

Pants took a while I was originally gonna use the same fabric as the shirt but after I had fitting issues wit it and the possibility of ripping my pants if I did like a major pose or something which I almost never really pose so to say but meh just for security I changed the fabric of the pants and just redid the whole things from scratch. Making pants are reletively easy they just end up having to be taken in alot at the end but its still easy. Now getting the white stripes in the front and the red on the side and bottom were hard. Because the fabric was more stretchy for my security there was the possibility if I sewed it up wrong it would look like all elastic-y on the side and stuff, which as I predicted it did but considering it was the last thing I had to do I was glad to have gotten it done when it was literally 2 weeks before the con. Getting the ring on was good too, the outfit itself is pretty much a new favorite of mine for it pretty much ranks up there wit my champ cosplay from last year.

Oh yes the leggings or whatever to call those things. Ok so those craps were hard to make but they are functional just hard to take off at the end 'a the day. First off to make it big enough for the foot to get in theres gonna be alot 'a room when the leg is in it. Luckly for me my feet don't grow so I don't have the problem of getting it in and what not like say a month or so from now. Basicly I took like I did wit the hand things then I made a thing that looked like a boot thing for the leg and sewed those together then put the red and the black and white things on the end. I managed to find 2 good fuctional zippers which were near the same lenth for both of them. Like I said they are both very functional pieces, but they're just hard to get off at the end thats all. So thats pretty much it to how I made the outfit and as for my hair I'd rather not discuss that for it was majorly over process in the debuting of this outfit /swt 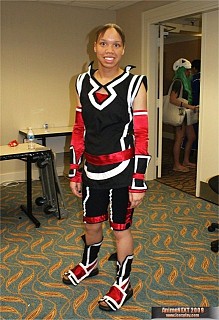 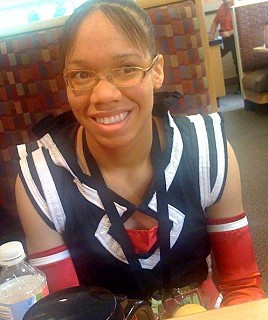 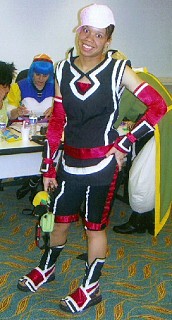 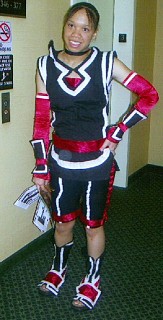 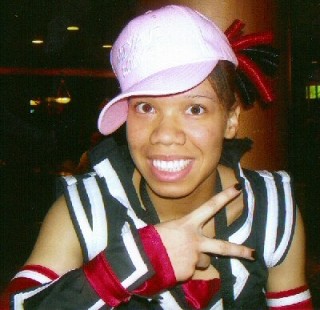