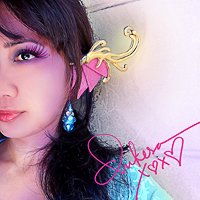 I have always loved Sailor Moon, now why didn't I cosplay from this series sooner? I was a game cosplayer - Ragnarok Online in particular - so cosplaying anime characters had not been in my list since after cosplaying Temari. My friend Geomie is also a Sailor Moon fan and during one of our hangouts we both decided to cosplay from the series one time, until she showed me the Pretty Guardian Live Action series. We then decided to push through with the plans and recruit members for the group at the Filcosplay forum board. Recruiting members was not so difficult, as Sailor Moon fans began showing enthusiasm and support for us.

We chose characters that are closest to our personalities, that if were the Silver Crystal and the power of the Moon really do exist, we would be the scouts we cosplayed as.

I got the role of Sailor Mars. She is strong, psychic, a little bit short-tempered but she is the toughest scout next to Sailor Jupiter. She looks after the whole team. And have I mentioned she is beautiful? :D Keiko Kitagawa, the actress, is very pretty and her portrayal had inspired me a lot.

Aside from wearing the suits, making the accessories was awesomely fun! (http://www.sheezyart.com/view/979253/) I made majority of the accessories for the whole group from the tiara to brooches, to earrings, to wristbands, and to the special accessories each of the scouts have.

I also love the wig! It is very very long! It is my first time to wear one, though the wig I bought did not have bangs so I have to cut it. Because I have no experience with styling wigs, the bangs turned out awful so I have to keep trimming until I got it looking better.

Not only that, it was a wonderful experience going out to look for the perfect materials for the accessories. It gave us a lot of time to bond and know each of the scouts better. We all became friends.

I like this costume a lot because I found ways to keep improving on it. In the course of time that I have this costume, it had been altered to fit me better, I had the ribbons made smaller, and the accessories replaced with new and better ones.

The sailor suits were made by Cargins Dance Wear. 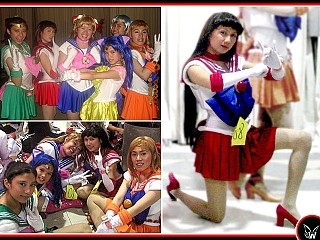