Ashe... She gotta be one of the biggest bitch to be a princess XD But I fell in love with her outfit (though not with that overshort skirt at first xD) But more I played that game, the more I started to like Ashe as a character... she is not so cold and sad without a reason... :O And it´s fun to cosplay her, because I even look like her a little bit XD lol, we´re even in same age!

And now I gotta tell, that this is my first costume, what I sewed with sewing machine xD Silkmonkey helped me to use it and also to make some patterns... thank you so much for it! <3

I bought her belt from ebay. for 5 euros :3 I love it, and I´m definitely going to use it on my every day life too. It also keeps my little skirt down, so the perverts won´t see my butt xD (for that reason I also made pink mini shorts to keep under that skirt, so I won´t feel myself so naked xD)

Her wig looked so funny, when I get it... It was too big... I looked like my granma xD So I had to cut it a little bit, and now I think it looks fine...The wig was also a little bit too yellowish blonde, but later I noticed, that it looks a lot better in photos than ash blonde, which looked like granny grey on bright light :P Though I still look like my granma, if I wear this wig without my costume xD

I´m planning to wear this costume at the next summer con... that skirt will make sure, that I need some friends to protect me XD I´m still wondering, should I make her sword, or not... it looks difficult. And I´m not planning to go on compatition with this costume after all, so let´s see, if I got some time and motivation x3

I like to make accesories... This giant jewelry has made of modeling clay (Master Viveeh told me that x3) and I painted it with golden spray and with ruby red and turquoise copic pencils. lol XD

Armors on her legs weren´t so nice... :p To be honest, they were the most difficult part in whole freaking costume. &gt;< But annoying part or not, They were still part of it, and I had to do it. Well. at first I sat down and started to draw some pictures... They had to look like an armor, but at the same time, I wanted them to feel comfrotable for me while walking... and also make sure, that they won´t drop off :p

I decided to make them of papermache And to share the armors in pieces. I build them on thigh black socks, I made of some strong fabric. It worked pretty well :D Then the details. Big ones are made of modeling glay and I painted them with golden spray... Smaller ones I just painted with darker color :p

Shoes I found from swap market, and they cost 2 euros xD I just painted them with golden spray. I also tried to put those ankle armors, but it was so difficult to walk when they bother my ankles... So I decided to take them away. 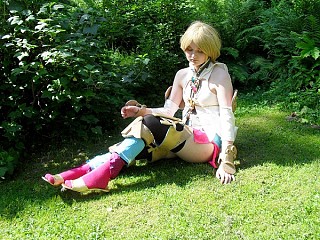 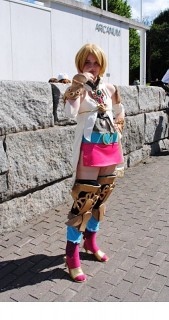 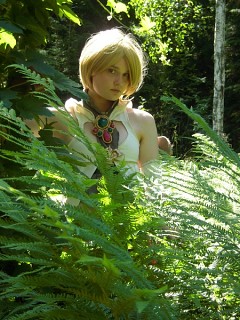 Narnian Gorgeous Ashe! You did a splendid and beautiful job!

silkmonkey complicated shoes are sometimes a pain in ass, for example the Lang-shoes : P they're supposed to have paddings on ankles but if you paint the paddings, the color starts flaking away 'cos of the movement >_< but markers are surprisingly useful at cosplay : D looks awesome, you've improved a lot in a couple of years o/