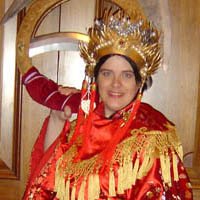 At the time I made this costume, Square had just barely released it's character designs and trailer for FFXII. I expect they'll make a few tweaks and changes before the game is actually released (although hopefully not too many that my cosplay of the character becomes unrecognizable.)

The white part of the uniform: I had to make this by draping fabric over a dress form and finagling the pattern as best I could. I've never before made anything which even remotely resembles this outfit before so it wasn't an easy task. I used gold trim and gold vinyl applique to create the decoration on the front and sideflaps. Gold vinyl straps were needed to hold the top in place, and I had to reply on the liberal use of carpet tape to get the bodice and armlets to stay on my body. (Ouch.) Around my neck I wore a sailor collar made of navy satin trimmed with gold. The brooches which held it closed in front were made of foam, plastic and resin.

Underneath the white part of the uniform, I wore a nylon-boned corset made out of denim fabric.

The miniskirt was made out of pink vinyl. The belt had to be made from scratch. (I used a blue strip of vinyl cut from a kid-sized Barbie rain slicker and attached it to a round, center-bar buckle.)

All of the armor was made using my foam and plastic sheeting method. The shield and parts of the sword were too. (The sword was not her default one, but rather, one I based on some screenshots I saw of the game. I figured this sword would be easier to make in the short amount of time I had to make it in. Due to the fuzzy nature of the screenshots, I had to apply liberal amounts of my imagination towards the weapon designs.)

The knee cuffs were made of powder-blue fabric trimmed with gold. I hand-embroidered the fleur-de-lis which appears on their outer sides.

The shoes I made by gluing foam and plastic over a pair of sandals. I used knit fabric to make the red part of the leggings.