The World Ends with You 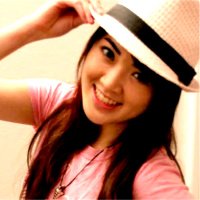 Well, this was my first time sewing, and I've realized how awful I am at it. D:

I made the jacket based on a similar-ish jacket I had, but it was pretty much made free-hand. I drew up a pattern myself, and it took me several days to make it with the help of my friend. The jacket's not too great, though.

The hat was from Charlotte Russe, but it was originally plain black. I painted the white stripes and added the buttons, which I also painted with the help of my friend. :] I think the hat's pretty cute.

The pink and black tanks were something I already had in my closet. I just shortened them.

The skirt was originally shorts, but my friend modified it for me and turned it into a skirt.

The boots were something I already had. I didn't have time to stick in the yellow stripes on Shiki's boots, though. D:

I actually made the bag myself, and its zipper is operational. ^-^ Sadly, it's unstable, though. Haha, yeah, I'm not too good at cosplaying. XD

I also made Mr. Mew. He's missing his tail and paw pads. I'm pretty proud of him, though. I drew him on a piece of newspaper for a start and then traced the pattern onto the cloth and started cutting and sewing. He's all crooked and stuff, but still adorable. <3

I was unable to procure a reddish colored wig due to financial issues, but anyway, Anime Expo 2009 was pretty fun. =D

Oh dear, I hope I improve on this cosplay thing. I'm artistically-challenged. XD 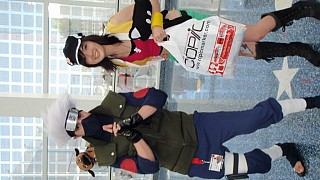 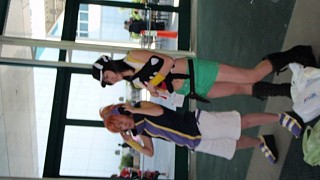 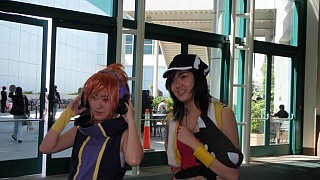