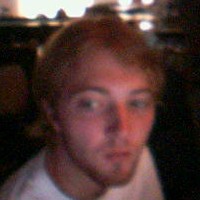 This was a really fun costume, and my best yet. I was lucky in that I could flat-out buy a good chunk of the costume: the gloves, shoes, pants, and white dress shirt. The rest of it certainly made up for those in the amount of work it took, specifically the evokers.
Going from the bottom up, I made the holster/belt out of vinyl and modeled it as best I could after what it looks like in the game (since they don't show the belts/holsters in the character concept art). The red vest definitely had some new experiences for me. I used a standard vest pattern and a sweater-like material and made the basic vest. After that, I used thin(in width) strips of thick interfacing along all edges of the vest and sewed a matching flap over it to hold it along the perimeter. Then to get the ridged look I manually went through and sewed every single line on there. The buttons were fairly easy. The closest I could find were long wooden oval-shaped buttons, so I just took those to a belt sander and reshaped them into Akihiko's. Finding a good metallic black spray paint proved difficult, so to get a good metal-looking black I combined some silver and black sprayed simultaneously from a distance. The boxing club pin was a simple roll of super sculpey bent to the right shape and with a safety pin stuck in the back. Good metallic gold spray paint is luckily rather easy to find. His sleeve-clamp-thingys are actually a commonly sold product, except they only come in white. After a good amount of dying (that elastic didn't like it very much) I finally got a good shade of red. If you're wondering what that thing is attached to the one on my right sleeve, its a small card of "The Emperor" from the Persona 3 arcana. The wig wasn't too terrible. It was the white flat-top wig from Amphigory.com and required very minimal amounts of trimming to look right. After that I used AW Ink and some rubbing alcohol in a spray bottle (I found this in a guide online on how to dye wigs) and turned the white into the right shade of grey.
Lastly, the fun part: the evokers. I made my own and my girlfriend Tsuki's (she was Yukari). These took me a VERY LONG TIME. I'm not kidding, each one was like, 40 hours. The main reason for that? I made them out of a solid block of wood with a dremel tool. I can't even count how many little slivers of bass wood I got in my eyes (yes, i was wearing safety glasses, but to get the fine details my face had to be about 4 inches from the wood) and how much sawdust I inhaled. Yum. I'm sure my lungs liked that too. Anyways, once that was all said and done I needed to paint the darn things. The base painting went fairly uneventfully as I coated each gun in a metallic-ish grey, then carefully put the black on the handles, and equally carefully put the blue inside that thing in the middle of the handles. Then the hard part: the lettering. I eventually decided on printing out a picture which I had resized to be the right proportion and take an exacto-knife and veeerrry carefully cut out the lettering and other thin lines to make a stencil. With that done, I taped my stencil onto the gun and began painting away...with a 4-hair brush. That was also very painful. Once it was all said and done and I bathed the things in polyurethane over a few days, I had two nearly identical evokers except for very small differences (hey I made them out of wood independently what do you expect? &gt;.&gt;)

Overall, I am extremely happy with this costume and I think it came out just about perfect. For the first time ever I have a costume that I don't feel there is anything that needs to be fixed. 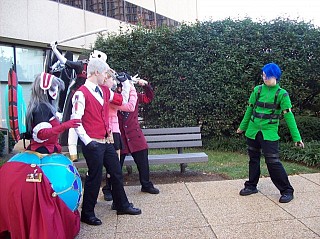 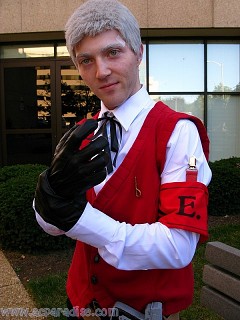 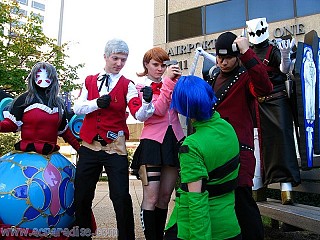 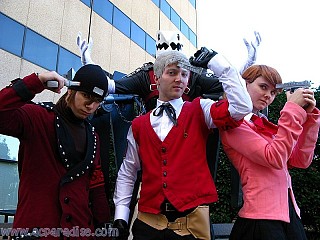 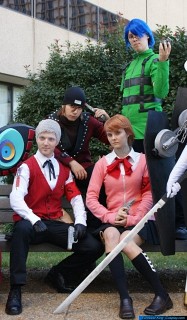 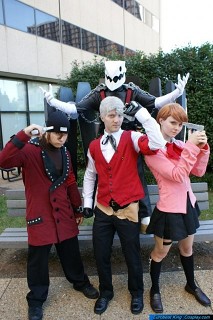 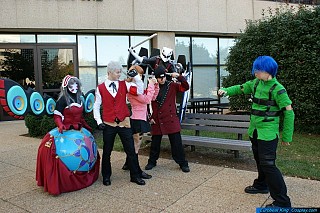 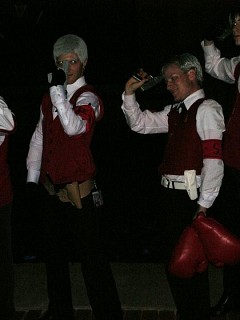 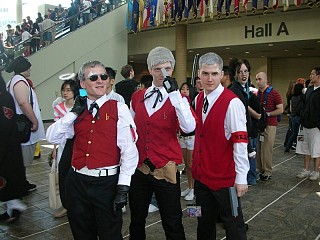 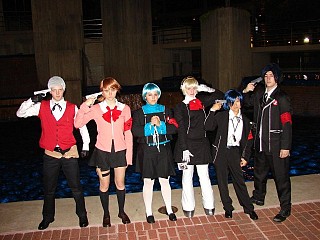 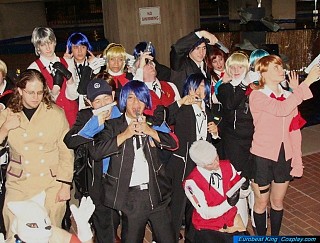 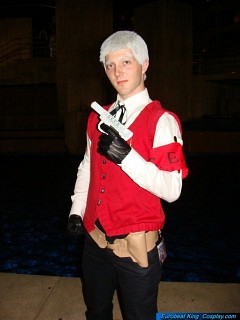 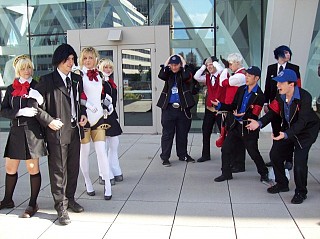 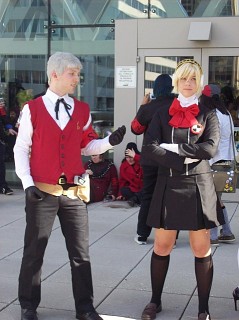 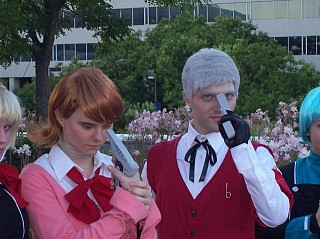 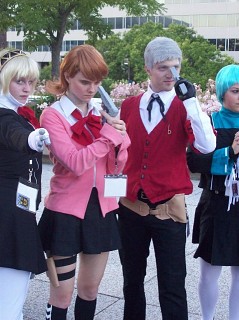 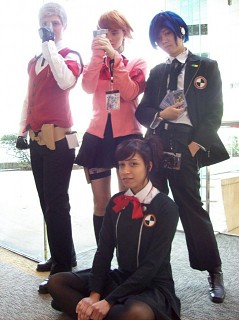 arjay00 dude, where did u get the sweater vest? ive been trying to find one that i wont mind cutting up and moding a bit, just pm me ~thanks!!