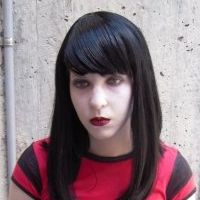 Nino has been on my To-Do list since I played FE7, way back in like March of 2005. She really stood out to me from all the other characters. Not only is she super cute, the best mage in the whole game, she also canonically gets with Jaffar, who is hotness incarnate. And she's really sweet, too. So yes. She's one of my favorite Fire Emblem characters EVER.

The white dress was made using the same pattern as White Mage, but the sleeves were altered from a blouse pattern. Aside from the zipper, I did all the sewing of it, and it was my first time making a facing. The pattern itself is a size too large, but it makes the skirt look poofier, and that I like.

The headband was obnoxious. I had to get two lengths of ribbon, as it didn't come in the right width, and not only that, but it only came in the right color with wire in the sides. Sewing that together was a right pain, as it kept fraying all over the place. Then when I was styling the wig, with headband on, my wig block fell over, and the headband snapped clean in half. So I had to rip out the stitching, and redo it with my backup headband. This turned out to be good, though, as it allowed me to Fray-Check the hell out of the ribbon.

The cape is made of crushed velvet that looked much bluer in the store. =/ I used a simple pattern that called for more fabric than it actually used, but it was very easy to sew up. Oh so easy. My only complaint is that it sheds. Brown clasp was also easy - handsewing along a fabric-established grid and snaps.

The vest! It's made of a comfycomfy knit, and my mom sewed it together for me, as I have no machine at school. I handsewed on the light blue bias tape, and I chipped my two front teeth doing the hem. Cheap cheap needles that don't like going through fabric and therefore need extra help being pulled through and that break in half after little usage are apparently strong enough to break tooth. ;_; But then I got good needles and the above-bust and collar bias tape was easy-peasy to sew on. I also added a hook&eye to the back of the collar, to make it look like the two ends are actually connected.

The wig started as a Femme Fatale from Amphigory, in Toxic. It was my first styling ever, so I totally ruined the undermost layers by straightening them. It wasn't very hard, just lots of overthinking and thinking I screwed up. I used TristenCitrine's bang cutting tutorial, and found that a steamer + hairdryer on low works wonders. (Oh course, then I dropped and broke said steamer...) I also put in some green streaks with a Sharpie. It's not flat enough in some places, and too poofy in others, but for a first wig, I think it's pretty good.