I've been a big fan of Rule of Rose since it was released in 2006. It's a really interesting concept for a horror game with a very deep storyline and some really creepy and haunting visuals. I actual bought material to make a Jennifer costume not long after the game came out but I was intimidated by the style of the dress and never got around to making it.

In early 2009 when I was considering going to Otakon, I was contacted by Avianna and she asked if I would be interested in being a part of a Rule of Rose Cosplay group with her and Leesers because they're both also huge fans of the game. Of course, I was thrilled by the invitation and readily agreed to go to the con and be in the group. :3

Avianna was going to be Diana and Leesers was set to be Jennifer so I decided Cosplaying Wendy or Eleanor might be fun choices. Eventually I settled on Cosplaying Eleanor because I figured with a small group it would be more interesting to have more main members of the Red Crayon Aristocrats to torture poor Jennifer.

This costume was really finicky and I'm still not completely happy with it. It's a little hard to find nice reference images for this character because she often appears in candle lit rooms or in the dark. I ended up buying several metres of a mucky orange fabric from Fabricland in late April which was on sale just in case I wasn't able to find better fabric for the costume. Well, I was never able to find a better fabric so I ended up using it for the dress. From the references I knew that Eleanor's dress was a mustard brown colour so I figured given the fact the fabric I bought was 100% cotton, I could tea stain it. I tea stained my fabric twice and left it soaking for a while and it did very little besides lightly dulling the orange. (~_~);; Since my attempts at tea staining failed it's made me feel a bit disappointed about how the costume turned out.

I owe a huge thank you to Pan because she was the one that patterned out the dress and shoe covers for me. :D I had been looking through old patterns to use but Pan offered to help me pattern it out since I'm so small and store bought patterns have a tendency not to fit. Not to mention the fact that the dress is really old fashioned so it's hard to find patterns that will work for Eleanor. I went over to Pan's house about three weeks before Otakon and we spent a whole day patterning the outfit out. Pan also helped me cut my wig. I ordered it from eBay and it wasn't very expensive so I was worried it would be poor quality but my wig was really soft and Pan just trimmed it a bit around the sides to make it perfect for the character. :3

With the pattern, I cut out and sewed the pieces of the dress together which was pretty straightforward. I didn't have to worry about darts (as I had to bind for this costume to appear more child-like) or anything like that. I ordered rick-rack from eBay for the bottom of the dress which is the other thing that bothered me because I underestimated the colour and bought rust when I should have bought a darker colour so it would be a nicer contrast.

The flowers were a pain in the butt to make. I made 18 of them to correspond with the 9 that I could see in the front of her dress in the one official image that was released for Eleanor. They were made out of felt and each one looks unique because I fail at being artistic and consistent. XD Sewing them on was also a pain. It required using invisible thread to avoid sewing the tops and bottoms of the flowers separately with different thread.

The invisible zipper in the dress is off colour wise from the fabric because I anticipated the dress actually dyeing brown. XD The sleeves were hard to set. I had to ask my mom to work her magic and sew them in for me (that and because, like usual, I was struggling to finish my costume in the last few days before Otakon).

I patterned out the cuffs which were simple enough. The fabric was pretty thick so I didn't have to interface them (or the collar for that matter). I was worried about adding the white trim. I usually use bias tape for trim because it looks nice and is matte. In this case I had purchased white ribbon for the neckline and although it was satin, it looked much nicer as the trim for the collar and cuffs.

Pan had made me a pattern for the collar but I had trouble getting the shape right so my mom and I dug up an old dress pattern my mom had bought for me when I was very little. It had the perfect collar style to use as a base! I think we also used one of the collar types in this pattern for my Hitomi costume. It was a real lifesaver as I was working on the collar the day before I left for Baltimore. My mom sewed in the zipper for me for the collar (it does up in the back) which gave it a perfect fit. Getting the collar to work was my greatest worry with this costume. XD I had to rush making the holes and adding the ribbon around the neckline and around the bottom of the collar. I was putting the finishing touches on the ribbon while I was at the con. The collar was not attached to the dress. I'm considering putting snaps in it but for Otakon is was held in place by flash tape. (^^);; It worked freakishly well actually.

The shoe covers were annoying to make. I struggled with getting the right fit and I originally intended to cover buttons so they would match the collar and cuffs but the fabric was too thick so it was fighting me. I ended up rushing out on Thursday afternoon to buy brown buttons from Fabricland. XD The covers were closed using velcro. I think they look a bit messy so I might try to adjust them.

This turned out to be a really fun costume and being in a RoR group with Avianna and Leesers is what made Otakon a memorable experience. We're all still a bit in shock that we were able to find each other and do these costumes since RoR is pretty under appreciated. I was recognized twice at Otakon while wearing this costume but the people that recognized me were so happy to see RoR being Cosplayed that it made it totally worth it. (^^)

We did a private shoot with Elemental at Otakon which really was the highlight of the con and we re-wore our costumes with an even bigger group of friends at Ohayocon 2010. Being able to capture the essence of the series through Cosplay and in photos really made me happy that I was able to join the group. Avi even found and edited paper bags for us to wear when we tortured poor Leesers and both Avi and Leesers had amazing props! I was finally able to find and buy a birdcage in August 2010 so I'm looking forward to doing a shoot with the cage and hopefully the whole group again sometime in the future. (^^) 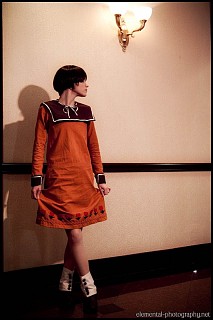 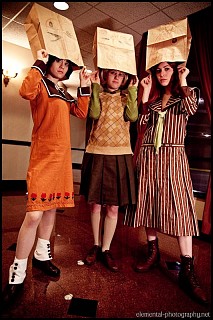 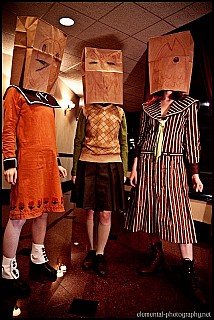 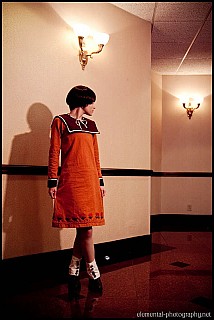 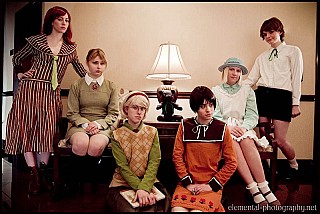 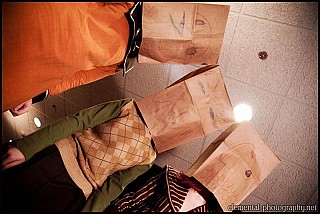 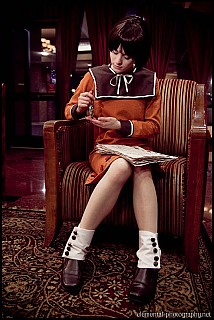 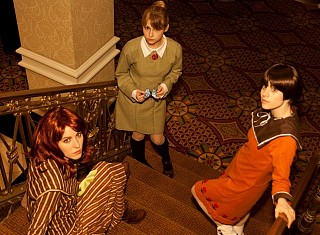 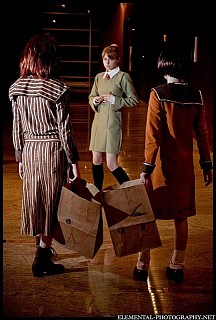 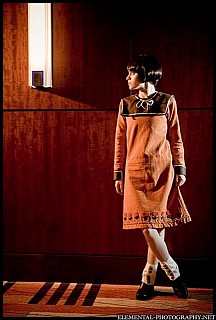 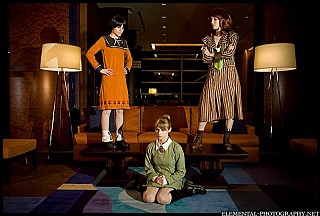 Ika YES I wish there was more ROR cosplay.

MollyMonster you win at life.