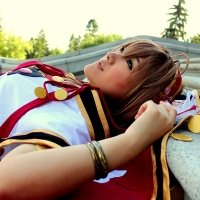 I really love this series (I'm just getting into it so don't shoot me for getting things wrong about it.) and I love echo. Her color scheme for her costume is pretty awesome and was a nice step away from my typically pink costumes. So i went blue :)

The wig was a nice change. Short, sweet and soft. The bangs of the wig just had to be cut a bit, but I think I might some more trimmings to it. I didn't have much time to properly style the wig as nicely as I wanted to. So I'll probably fix the wig sometime in the new year.

The dress was pretty simple to make. I started off with making a blue sleeveless dress and just attaching all my details from that. The materials were a very nice soft cotton (from the quilting corner...)and the white was something I had already. During construction of this costume,I started looking alot like Eureka from Eureka 7...which was interesting.

Sleeves weren't too bad. They were done in 3 seperate parts, I had a blue cover, a white 3/4 sleeve and then the ruffles/pleats. I tried ruffling the bottom of the sleeves, but the fullness and the cleanness of the ruffles didn't look as nice as the peats. So I ended up pleating the bottom of the sleeve. The white deisgn on echos sleeves were a bit troublesome. During the time I was making it, I had little/to none reference shots of the back of her sleeves or an all around view of it.So i wasn't sure if there was a design on the otherside and such. In the end i made it without the design and just lined it on. The white design was attached...secretly :P

The black tie was made of black sateen and then two sides stiched together and a white stripe was added. Then the blue button was glued to the balck tie with a clip on to attach to my black choker that went through the white collar. ( i made a little clip on! :] )

buttons were made from sculpey and were later painted with acrylic paint and had white ribbon attached for the crosses. These button are not functional. I was debating whether to make them functional or not, but in the end, i couldn't find any functional buttons so then I just made them.

This whole costume took about a week to complete and everything (excpet the boots :P) turned out the way I wanted them too :) So I'm rather pleased with this costume. 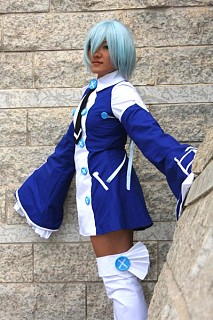 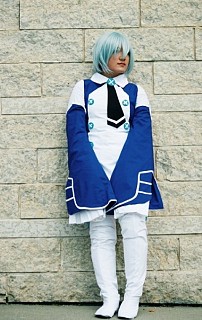 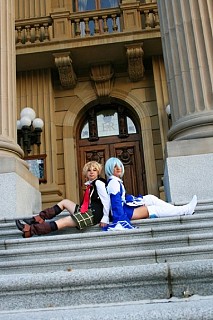 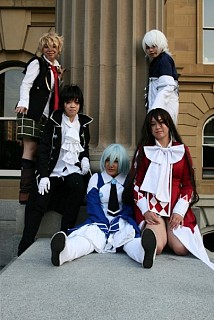 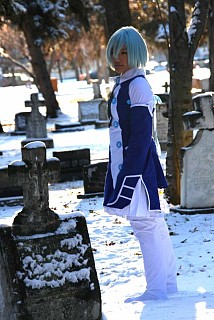 bearmoon ZOMYGOSH~ One of the only other Echo who's done her thigh-high boots!! *spasms* Very nice job!