I have to redo all the costume because I'm 23 and I did it at 14 years old and it were tight, so now it's tiny.

Finished and new photos! Fortunatelly I had half the fabrics lol.

Yuna is one of the most awesome characters I have ever seen. She resembles Aerith a lot. They're both able to sacrifice themselves for the people and their planet, have a sweet character and beautiful dresses. The most sad thing is that nobody of us in the real life would sacrifice for humanity. Pretty shameful.

My friends wanted to cosplay Summoner Yuna at the same time but in different variations. I had to remake my Amano Yuna since it's too short for me now. My friend Shinny went as a Dark Summoner Yuna (based on a fan art) and my friend Yunny went as the regular Summoner Yuna.

I bought 2 meters of yellow satin for the obi, but I used the back as the front side. I painted it with fabric paint in green, white, pink and violet colors and I added glitter to them. I made the blue circle again with blue felt, and the hibiscus flower with red gauze in double layer, which I embroidered around with red thread. I painted decorations with white fabric paint and black and violet nail paint, and added glitter to it. I did the butterfly bow and painted it too, and filled both of them with yellow felt to maintain them stiff. It was all glued, excepting a few stitches here and there at the back in the bow and the hangers.

The skirt was made in December 2008, because the group was planned for 2009, but we had to delay it. I sewn it by hand, doing the pleats before cutting the fabric, as I did before (I'll never be crazy enough to make something like this without measuring first xD). This time I used Nami_Shion tutorial for pleating skirts so I wouldn't end sewing the pleats xD. This is the tutorial, is really good. It's in Spanish, so if you don't understand it, just ask her: http://agujadecristal.webcindario.com/tutorial.php?id=falda_plisada . Just follow the drawings, tack the pleats and iron each one by the two sides, moisting them with water and using wrapping paper or a piece of fabric between the pleats and the iron. Surprisingly, my skirt accepted the pleats, and it's made of dark violet knit-silk. I already had the fabric from long time ago. I bought it to practice my sewing skills with elastic fabrics (since it's really cheap). But never used everything of it, so I could make this skirt and Hikaru Koyama's with the leftovers. Finally, I painted the pink flowers and the white creeper with fabric paint and added glitter.

I bought a nice white satin for the shirt and the sleeves, with a subtle sheen, 3 meters. I sewn both sleeves and the shirt in the sewing machine. The sleeves were easy, but the shirt was a bit difficult, since it has to be wide down, narrow in top and crossed, with a thick neck in the back to join the two parts. I had to make it two times. I get the measurements wrong the first time and it was tiny. Each part had two layers in order to look more consistent. I didn't want the stitchs were visible. I painted the sleeves mixing three different shades of pink fabric paint.

The earring and the tubes hanging from the obi were made with plastic tubes. The women attending the Ironmonger Store give me the idea. I used thick cord in the first version, but it went all ruined with time and the first earring got all rusty and broke (I loved the feather earring I used as a base back then T_T). I painted the three tubes with nail paint and synthetic paint in baby blue color, mixing white and dark blue I already had. I used also black nail paint for the earring tube, and violet glitter nail paint on the black. I added a lot of different beads to the tubes. Some were painted by me in different blue shades, and some were left as they was. I bought only the big ones and medium ones in dark blue, and reused a lot of beads I had from the first version. I decided to make the drop big beads with fimo because I couldn't find big beads at first. But when I had them finished, I found them in the fabric store I usually go, in white color. I am really lucky! I painted them with black and yellow nail paint, and make the black line with a black pilot pen. I added glitter in violet color in all of it, both the tubes of the obi and the earring. I love glitter, and I think it's good for these versions of Final Fantasy characters since it help to obtain the magical and crazy effects Amano drawings have.

I used my own hair since she has it long in the reference pictures and my black high boots.

In 2014, I bought the short wig for Yuna, some green rhinestones, three sheets of foam (white, red and yellow), translucent glue, 1 sheet of foam core board, acrylic pink spray paint, new boots since the other pair got broken and white fabric.

I did the sleeves again and painted them with spray since they look better this way. I used some white elastic I had and recycled the purple satin ribbons from the old ones. I styled the wig with gelatine leaves, as usual, and cut the bangs. Then I used the other materials to make her Solomon Ring and Nirvana Staff. They were easy to make, since I used the foam core board in the middle and covered it with the foam, then painted, then used an old acrylic varnish I had, then glued the rhinestones on.

For the Solomon Ring to float on my sleeve I used some of the remaining magnets (I still have a lot!) I bought for Noel and Serah's weapons. I did a bracelet out of white foam and put the magnets inside two layers of foam in the middle. Then I stuck other two magnets in one side of Solomon's Ring. I put the bracelet under the sleeve and the Solomon ring ON the sleeve. It gets stuck like glue because of the high power of the magnets and appears like it's floating on my arm! If I make enough pressure I can remove it from my arm. 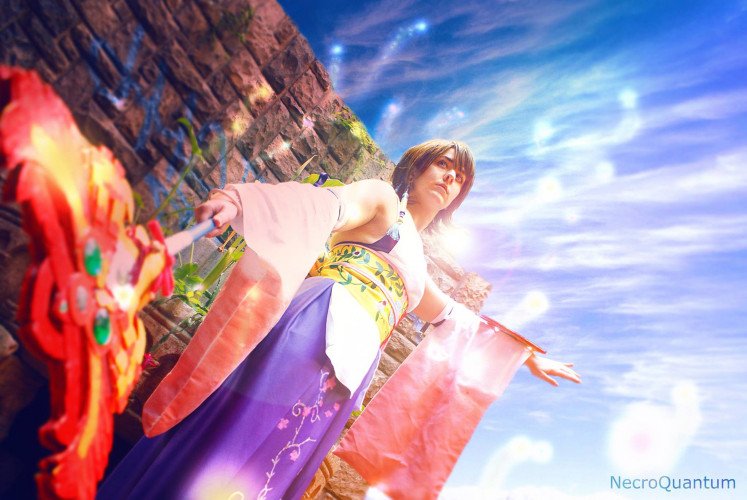