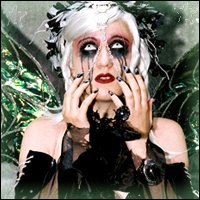 Top:
This was the last piece of the costume to be made and it really shows ^^; I basically just drew out a pattern with the right shape and cut it out of the same fabric as the main skirt. It's lined with interfacing to try and keep it stiff. The "ribs" and skull are all applique made from the same velvet material as the underskirt. All the bones and the skull have a thin black trim outlining. The back is just a stretch material.

Cape:
I didn't have enough time to make the shoulder armor so I modified a cape pattern to cover my shoulders ^^; Gheeeetto I know. It's made from a black twill material. I tried to shred the bottom edge, but the material just wasn't having it, so it does look a bit odd.

Skirts:
There is a gray velvet underskirt with a really pretty black beaded trim along the bottom, however it's unseen because it's an underskirt! I made an underskirt because the base skirt material is just slightly see-through and this costume was made for a masquerade with strong lights.

The top skirt is made in 4 layers. The base layer is just a simply trained skirt with the added stripes at the bottom. The stripes were made from silk dupioni and hand sewn applique onto the skirt. The lace trim was hand dyed to a shimmery gray and also hand sewn on. On the trim there are hand sewn beads that go along the entire trim. I added the skull, which is also applique onto the face of the skirt, and it also has some beading on it as well. The train of the dress has shredded chiffon sewn to the edge with some black feathers gathering at the center of the train. I added the feathers because she was a ranger and I thought they'd add to the dead-royal look I was trying to achieve.

The next layer is not very noticeable from the front. It's a swooping shape that parts in the center front and goes around the back. There are two trims on each section of the tops skirts. The inside trim is actually two trims on top of each other. The same very thin black trim used to outline the bones on the shirt is sewn down the center of the silver trim. The outside trim is a horribly expensive but gorgeous black and silver weave I found. Both of these trims are also on the bottom of the main skirt. The third layer is two separate sections which come down into points in the front. The last (4th) layer of the skirt (which is most visible) comes down into points on the side. This is also two sections. After all the layers were sewn to the waist band, the skirt ended up being very very heavy.

Belt:
I made the belt buckle out of sculpey. The eyes and nose are actually embossed, then painted. The waving trim is the same trim used on the top skirts, just minus the thin black trim down the center. The flaps in the front are made from a very thick fleecie-suede material then covered with the black. The borders are trimmed with silk dupioni. I then put in silver studs for the accents. Around the bottom edge of the belt there is most shredded chiffon, but it is invisible against the skirt. I added aluminum chains instead of draping the very top skirt because, for whatever reason, when I think of banshee it seems more appropriate. Plus, I liked how it looked.

Ears:
The ears are made out of foamies! But that's totally obvious. They're two layers with a whole bunch of paint.

Eyebrows:
I used feathers for the eyebrows. I found rather straight boned feather and cut all but a very little of the actual feather off and then painted them so they weren't a stark white (in the later picture I had to use black feathers). The feathers are glued to my face with prozade.

Lastly, I'm wearing my Yuna boots and the wig I got from Cosworx. I have no idea if any of that makes sense, but it's the gist of it. 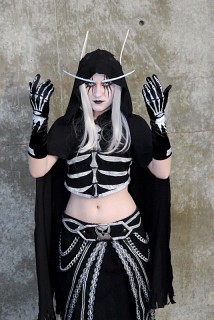 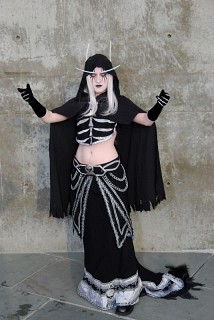 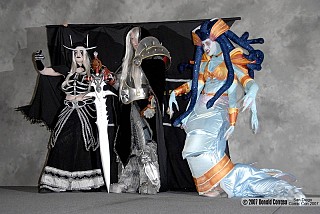 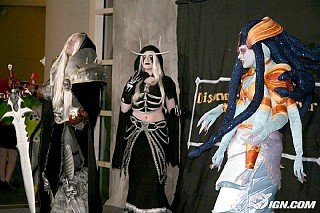 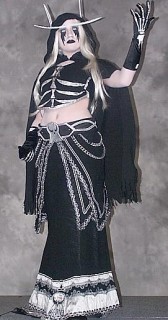 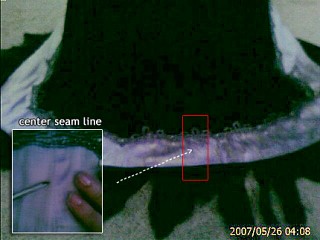 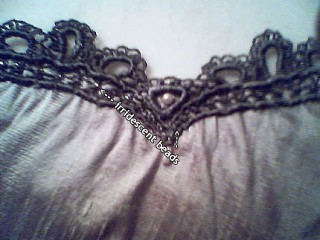 CalamityJade I love your version of the first skin, great work! *_*

kuromeru_chan it's such a pretty costume!!!!! @[email protected] i wish i could make a sylvanas costume as pretty as that!!

Jull Really great costume. And Thansks for your comment. :***