Glinda the Good Witch of the North

The Wizard of Oz 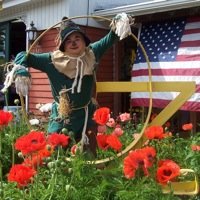 One of the more complex costumes in the Oz series, this one took about 5 months to complete. We used the Simplicity pattern as a guideline, but made some adjustments in order to be more accurate. For example, we added 2 additional panels of fabric to the skirt to make it fuller.

The base of the costume is in pink satin. The overskirt and sleeve puff are done in a sheer pink organza that is covered in rhinestones and pearls. This gives it a nice shimmer. On the satin, we applied tiny silvers stars. Unfortunately, the stars are not nearly as visible as we had hoped, so we will be adding some larger one, especially on the skirt. The sleeves are puffed using wadded-up tulle.

For the crown, I scrapped the Simplicity pattern completely as it just looked cheap. I instead took the an old crown (which was store bought) and used it as a pattern. It is made of thin plexiglass, which I found at an art supply store. It was then sprayed with a "pearly dew" spray that gave it a frosty look. We then sprayed glitter spray over that. Then we applied MANY, MANY rhinestones. Some were so small that it required me to use tweezers. I also added some springy things (I don't know what to call them), which I took off the other crown. The centerpiece is actually a Christmas ornament that I found at the Hobby Lobby Holiday Sale.

The wand is a Christmas tree topper attached to the top of a curtain rod. I then sprayed everything silver and topped that with glitter spray.

Under the skirt is a hoop skirt that was designed for Civil War/Souther Belle style gowns. On each hip, we added "pillows" that my Mom made from silk filled with Pollyfill. This gives the dress the large hip effect as in the film.

To finish off the dress, we added two butterflies and a rhinestone brooch. The larger butterfly was a Christmas ornament from Hobby Lobby, the other was taken off of a princess wand from the toy aisle; both were painted and glittered. We lucked into finding a very sparkly brooch for only $5 at an antique mall that we stopped at on a whim. 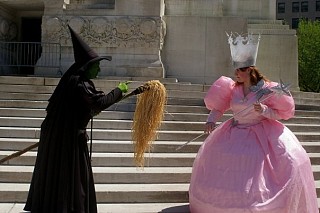 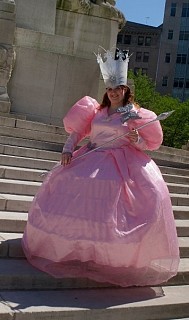 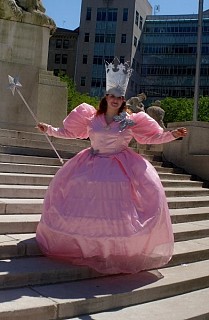 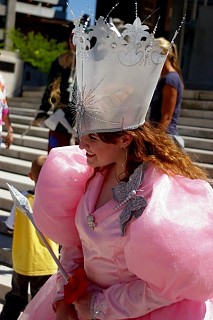 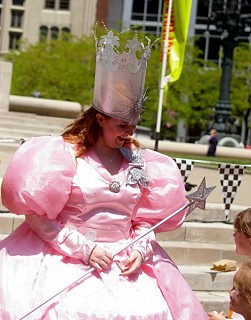 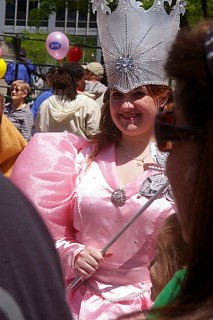 Lulu Rush good but I would have added more glitter

Disney_Witch Your crown is stunning.