well another scratch made production :p since the managers of B&N I guess they assume that us in outfits would scare all the normal people so they just say do for october <,<

I'm pretty much done wit it now, if only I can get a wig because my hair is so freaking short x_x

edits: I finally wore it to the anime club a few days ago and I feel good about that, and also I finally managed to get a wig too so that also made the cosplay epic /heh heheheheh I can't wait to get my pictures /fsh

updates and how I made:

Anyway on to the more serious matters, When I got word of the anime club doing cosplay night I just had to come up wit something else ta put together. I mean yeah I coulda always recycled wore my champ cosplay again or something but it was kinda cold and I assumed it would be around this time so yea. It took me a while to find whoever I was gonna cosplay but then I remember when I saw sola about a year ago and I say "well why don't I cosplay Matsuri the outfit doesn't look that hard ta make". So then I decided and I go out get the fabric for it, and some nice ribbon for sewing around the sleeves and threading in and out the buttom and top parts which was hard because I had to poke holes wit a scissor to do that because there was no other way I could think of doing it. Now luckly for me for the skirt I had this bright purple shiny, silk like fabric that mom found for me at a thrift store somewhere or where ever she said she got it. I always get fabric outside of cosplay specially if it looks nice because then I never know when I'm gonna need it and that time fabric shopping outside of cosplay really paid off because that was the less of fabric that I would end up needing. Making the pleats or whatever in the skirt was hard and I did it wrong kinda because after I put elastic in to fit where my hips are I guess you can say /hmm then I bend and iron in pleats but I should have did that before it that way I could just sew the pleats together and they would fit. But I didn't know how I would figure that out really so I just did whatever came to my mind at the time. Making the shirt was probably the easiest even though it still took me a whole day of work kinda. Usually when I make stuff I have problems fitting it because of my chest area or my butt sometimes. Only I know my body type for real but I still have those problems. I believe either my chest shrunk or maybe different bra or something because it was easier to get in when it came time to wear it /hmm now the purple thing that goes over the shirt, man I wish I would have made that better if anything, I mean it came out good but lets just say that part was harder to make then I though, then I had to sew the parts on the edge so it wouldn't look like rough edges and thath got hard because when the fabric is too thick then it friks up my sewing machine(also I had this problem wit my Judai jacket) and then I just have to either try to press it down for it to work or just take whatever gets sewn wit a grain of salt I guess but meh it got done /heh, oh yea the neck thing now THAT was the easiest to make /heh even though I made it last. Usually I make stuff and I make whatever is the easiest to make first then come back to the hard stuff. Even my hunting methods in RO are like that and speaking of RO I did that for my champ cosplay and got it done faster. But for this I started on knocking out the bigger pieces first /heh The hat is also made from scratch too. Well I just looked at the hat and tried to make it as best as I could and its actually too big for my head but if I put it on the wig shown in the picture then it stays in place. Also for the record thank god I found a wig because my straighten iron was being so phail its dead already I need a new one and I wasn't gonna let a whole bunch of random nap ruin my cosplay x-x but yes thank goodness because then I just cornrow my hair that way I could put the wig on or if my straightening iron worked I could just straighten my hair and stuff it up there /heh OHHH YEA and I know you people are gonna ask me where I got the umbrala, well I don't know where mom finds stuff at in terms of that XD I have another umbrala like that but its not fabric like that one its paper and its dying D: but anyway yes the umbrala almost made the cosplay just as much as I did and the wig /heh I mean sure it doesn't have the sky under it but frik its close enough as far as I'm concerned /heh wow that was alot of tawking aahahahahahahahahaaa but ok yea witout farther ado here is my latest cosplay of Matsuri from sola /no1 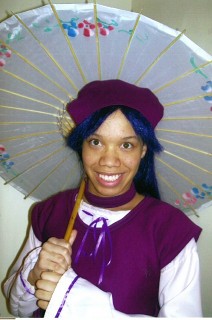