I am absolutely crazy for Team Ico and their games, this costume should have been a given! I already cosplayed as Wander, so Ico was simply next in line on my to-do list. He's such a brave boy, and the game is so beautiful and touching. I love how Fumito Ueda creates that special kind of atmosphere and story telling with minimal dialouge and relative simplicity.

For the orange tunic, I used a stretch twill fabric and did embroidery by hand for the brown stitching detail along the bottom hem, edges of the sleeves, and around the collar. I enjoyed working with this type of twill for my boyfriend's Kamina pants, so when I saw it go on sale I had to grab it. The pants were made also using a stretch twill. Both the tunic and pants feature serged seams so they will be up for as many wears as I care to put them through.

The tabbard was really the only difficult part of the costume, and I took the knowledge I learned from Wander and applied it to making this garment. I gathered up as much reference as I could find and scaled it to my size, then drew out the patterns on posterboard and made myself a template. Unlike Wander, however, the pattern in the front is completely different than the one in back, so I had to made two templates instead of one. I had to color code it and then use tracing paper to copy it, and then use the tracing paper version as a reference so all the symbols got placed properly onto the tabard, while the posterboard version got cut out and used to stencil the shapes - it was a chore, but worth the effort for a professional look to the garment. The symbols were all appliqued onto the main tabard, and I did a satin (embroidery) stitch around each symbol so they would be neat and tidy and stay on the tabard forever.

The bracelets were a bit tricky to figure out because of how clunky they are - I ended up using a thick foam base and covering it in fabric, the white stitches are all hand-embroidered.

The belt was made out of raw leather hide, cut to size. I slicked the edges to smoothen them out, and edgecoated the rough back to make that smooth, as well. As always, I used my trusty Angelus leather paints to paint the leather.

The footwear was an unforseen headache, I couldn't for the life of me find any sandals like his. It took me months to find a pair that was close enough and boy was I ever glad when I found them, but I still had to mod it to add straps over the ankles. I made the straps out of leather hide and treated it the same way I did the belt, then painted the entire leather sandal the same color to match.

The wig was styled by cutting it and layering it, the wig I had ordered never came so I had to take my boyfriend's old Lantis wig and trim it up - thankfully it worked out rather well. The makeup was done using Kryolan makeup to tan myself, my arms had gotten enough of the Florida sun but the rest of me had not. I'm Italian so I was able to bronze up naturally but I normally wear long pants and my face isn't exposed directly to the sun, so this is how it ended up, haha. In the end I liked the results of using this makeup, I was able to sucessfully match Ico's darker skin tone and the Kryolan paints didn't rub off, either...always a plus!

The horns were made using a pair of costume horns as a base, doing some modifications to them to make them smaller and better shaped, and painting them to look natural and accurate. They are incredibly light-weight so they aren't a pain to wear in the least and don't require any adjustments once they are on my head. They were then sewn directly to a stretchy headband, and several layers of sticky gauze goes over them for the completed look, with a few dangling strands to appear messy and because this is also how Ico wears his in the game. I was really surprised how well that gauze held, I didn't have to worry about it or adjust anything at all!

Also, this costume wouldn't have felt complete without makeshiftwings teaming up with me to be my Yorda - thank you so much, Britt! :D We had a blast in these costumes and will be wearing them together in the future for sure. 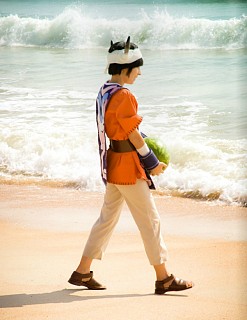 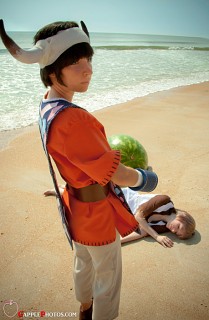 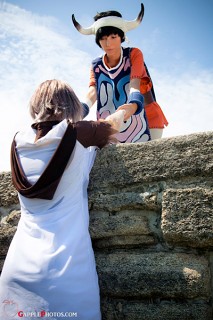 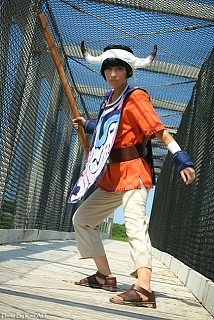 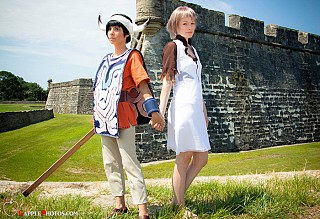 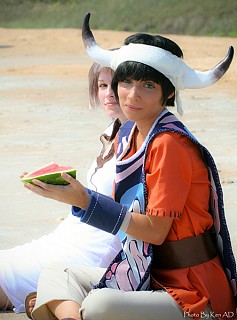 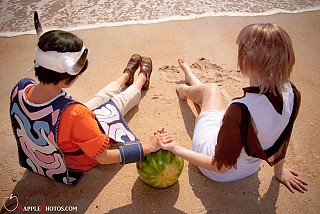 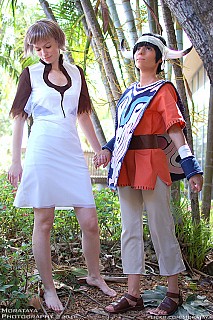 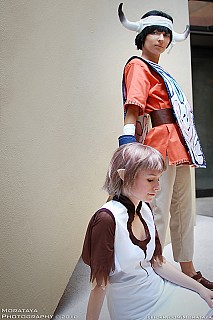