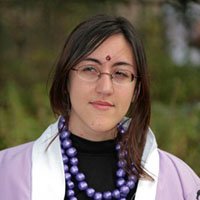 I loved Sakura's costume before I even knew where this character came from, so as soon as I had finished my first cosplay and decided it was worth going on, I knew Sakura would be next!

This costume was quite hard to make. It was my first time using a pattern and I know I would never have managed to do the hakama without my mother's help, but I did everything else on my own. So I learned a lot about what no to do...

- I wanted it to fit my body so I ended up making the top too tight
- I didn't have any red thread left for the hakama so I used pink thread. It was quite visible x_x
- I tried painting the flowers on the sleeves and put
my brush into water out of habit. It spread very quickly and the washing machine couldn't do anything about the stain
- I tried to glue red fabric to hide the damages, but my fabric frayed.
- I didn't have enough white fabric to do the underwear kimono so I used what I had left and did as I could. It looked really bad.
- I thought putting on the obi was as easy as the pictures made it look like and didn't practice until a few minutes before going to the con.
- I knew there were no dressing room for cosplayers not taking part in the contest, so I dressed up at home and went to the con in costume. I had to walk 20 minutes to go to the station then it took 1 hour by train to get there, and then there was the waiting time. So I was already quite sweaty when I arrived, and I lost the sheath of my awesome pink plastic sword on the process ;_;
- There were no dressing room AND there was no checkroom so I had to carry my stuff around all the time
- I didn't have time to adjust the hakama so it was too long and you couldn't see my shoes
- I was really hot, safety pins were not enough to prevent me getting automatically undressed and the shoes hurt so much that I had to change before the afternoon was over

So in the end it was quite a failure, but it made me even more determined to do this costume again and succeed! è_é I need to redo the top from scratch, and to change the thread of the hakama (easier said than done) But it will be for a fall or winter con, there's no way I'm wearing this again in summer XD

I know Sakura is shown as having a blue obi and a bright red hakama in most artworks, but I thought dark red and purple looked better and I still think it does :x 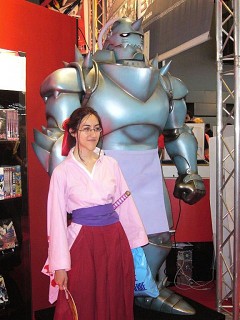