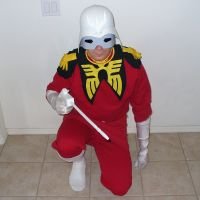 Nothing was done to the boots I wear with this costume. The pants, shirt, and face mask had to be covered in many strips of bandages (I used athletic tape) and have them sewn on to ensure that they would not fall off. The purple robes were fairly simple to sew together - I just took some rectangular pieces and made a sort of tube for the lower half and a sort of sheet for the upper half. Some Velcro was sewn on so the two halves could be attached. A pair of black gloves was used and a black belt was used as well.
Now for the sword - the sheath was made by taking some wire mesh, cutting it into the shape of a sheath, and covering it with brown duct tape. Simple enough. The core of the sword is two metal strips (used for holding down the edge of carpet) placed together to make a flat yet hollow piece. In accordance with the "no live steel" rule at 'cons, this was coated with two plastic strips attached with shiny grey-colored duct tape. The hilt was made of wood, which was sawed and drilled to make it hollow. Once the blade and hilt were attached, a wire was run down the hollow sword. A small wooden button was put at the hilt end and a bit of orange tape was put at the tip end. So all I need to do is press down on the wooden button to make fire come from my sword. I thought that was really neat.
UPDATE: I made a new sword for this costume. Despite the fact that the old sword had its metal part coated with plastic, most con security will not permit it nowadays. The new sword has a hilt made of wood. A hole was drilled in it so a wooden dowel serving as the core of the blade could be attached. The dowel was coated with posteboard covered with shiny silver duct tape to make the exterior of the blade. Unfortunately, the new sword does not spout a flame.
Also, I took a very cheap black wig, cur out five small pieces, and glued them to the headpiece because Shishio has some tufts of black hair protruding from the bandages on his head. 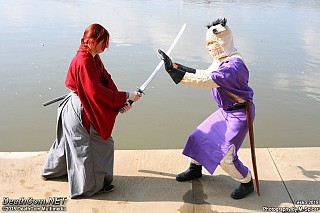 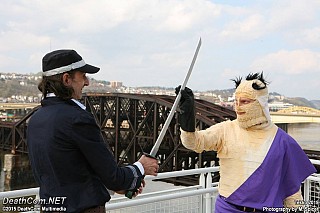 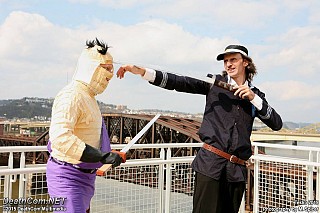 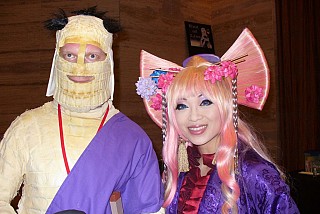 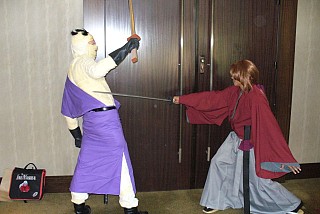 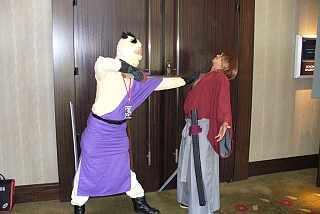 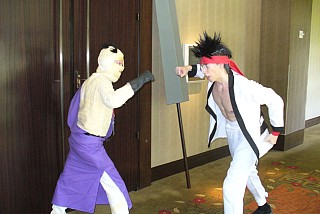 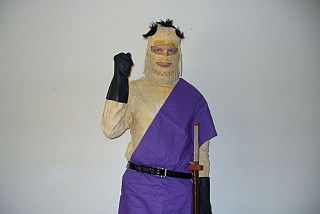 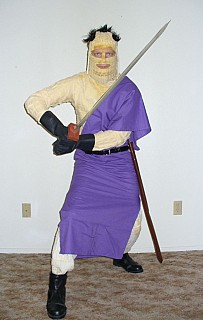