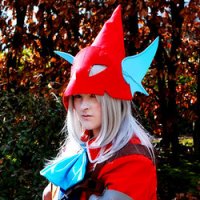 I played this game a lot over the summer and desperately wanted to cosplay a Little Sister. I think the best part was definitely the ADAM syringe - it's one of my best props to date and despite it having it's really annoying moments, it has quickly become my favourite prop I've made :)

I wanted to try and make this on the cheap, so I managed to get hold of some fabric that was £1.50 a metre I think! It was in the clearance section and while it's not 100% accurate, I was happy with it. The story was the same for the off white fabric for the apron. I was shopping for everything with my sister and we were basically getting everything the same so we could cosplay Little Sisters together. The shoes were something I already owned and I bought a bit of hair ribbon to tie up my hair with.

For the syringe, I bought a petrol pump dispenser off eBay for £15. For the point, I bought a wooden dowel and sanded it down over the space of a week to give it the sharper edge rather than just being a blunt dowel. After gluing everything together, I sprayed it with a metallic bronze paint. Eventually I'm going to weather it all over, but I was in a rush in the week before the con so I never got around to it. The bottle was simply a medicine container that I bought off eBay. 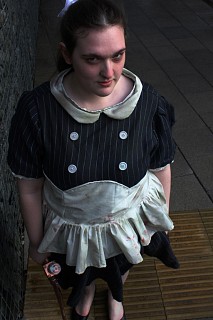