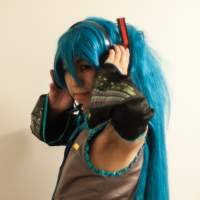 Ever since playing "Project DIVA: Hatsune Miku Arcade" at J-Pop Summit Festival 2011, I noticed this particular module (skin) for Miku while looking through the wide variety offered in the game. This outfit had a special appeal to me as well as the song that this module is built for in particular. I think this module gives this Vocaloid a classier image, if you will, and it's reminiscent of the early to mid-20th century nightclub scene, which is part of its appeal to me.

When I debuted this costume at Pacific Media Expo 2011, I was not entirely accurate with this module. Frilled shirts seem hard to come by, black ribbon was oddly nowhere to be found in the nearby area, and I had to work with a tailcoat I had intended to use with Sebastian Michaelis from "Black Butler."