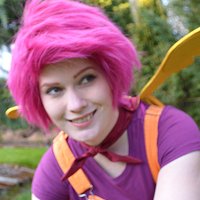 She isn't my favorite character from DGM (it's actually Lenalee), but I think I make a better fit as Road - and she is deliciously cute and evil.

I loved her design in the latest chapters, so I decided to try my hand at her white dress. I chickened out at painting myself gray for her convention debut, but I hope to do it for a photoshoot sometime.

Corset: Not my first try at working with boning, but definitely my most ambitious. I created the pattern myself by wrapping myself in cling-wrap and painter's tape, then drawing the seam lines where I wanted them and cutting it off me. It still required a little tweaking in the end - especially around the bust area - but it worked out okay.
The fabric was a lovely low-luster satin, although I found it necessary to use a stretch satin over the bust cups. The cups were cut off a cheap bra from Walmart, covered in the satin, and sewn by hand onto the rest of the corset.

The corset itself is three layers - the outer two made of the satin, and the inner layer that all the boning is sewn to made of heavyweight duckcloth for stability. It closes with a heavy-duty zipper in the back, and is also kept in place with a clear halter strap and another strip of clear elastic across the center plunge.

Skirt - The skirt is a separate piece, just to make things easier for myself. It consists of a 3/4ths circle skirt with 10 petal-like scallops and a zipper closure in the back. It's made of two layers, with the top layer made of the low-luster satin, while the bottom layer is made of heavyweight target and has all the boning sewn into it.
Each 'petal' has boning running down the center, and the hem is reinforced with horsehair braid for stiffness. The real trick to making it stand out, however, is the 18" metal hoop pinned underneath (I keep it safety pinned because it's far easier to store the skirt without the hoop attached). The hoop was harvested off of a wire wreath frame from Walmart and painted white to match the dress. I even used some wicked math skills to calculate exactly what point I should pin it on the dress to achieve maximum fullness. Geometry teachers everywhere rejoice.

Bloomers - So much poof. Made from the reverse side of a deep purple satin, I basically just cut two squares of fabric all the way across the 58" length - making each leg nearly 5 feet around without the elastic. I added in the neccessary cutouts for the crotch area, sewed the legs together, hemmed, and added elastic to the waist and legholes, and boom - poofy, poofy bloomers. I even added a little purple bow so I'd know which side was the front (the crotch cutout for the back is deeper because the butt sticks out more). Definitely the simplest part of the costume.

Jacket - Made from a deep purple stretch knit. The shell was modified from Butterick 4926, and the sleeves were patterned a little too tight and a little too long so that I'd get a nice stretch when I shredded them. I think I could have gotten better results by making them too short, instead, because the fabric is splitting from the stress and might not survive another con. I would have liked to make the sleeves double-thick so that I could have clean edges, but it would have been impossible to turn all those 'cutouts' right side out.
The jacket has a hook and eye at the neck, although I decided it looks better if I add in a tiny elastic loop for the hook to hang onto - giving it that 'not-quite-closed-while-still-somehow-skintight' illusion that the artwork shows. How the Noah are keeping their current outfits on, the Earl only knows...

Shoes - A pair of lolita-style Mary Janes I had lying around from another cosplay that never panned out - they were originally baby pink, then painted black, and now painted a reddish-purple with fabric paint to match Hoshino's artwork. One could argue her shoes are meant to be black, what with Hoshino's love of inaccurate technicolor madness, but I liked the purple. I cut off the mary-jane straps, and sewed on pom-poms I'd made out of blue yarn.
The ribbons around the ankle were another mindbender - ribbons can't wrap that way and stay up, HOSHINO, but I made it work with starps of black elastic that blend into the tights.

Accessories/Makeup - The tights themselves are faux thigh highs, shredded and then the edges sealed with nail polish to prevent further runs. Faux thigh highs - the way to keep your stockings from falling down all day! I highly recommend them.
For makeup, I paint my eyebrows black with mascara and use a purple eyeshadow trio with black liner. I do have gray body paint so that I can do her Noah form (honestly, she's never appeared 'human' in this outfit), but that will require me to change my tights. I do have a pair of deep gray tights and some black thigh-highs to sew together into my own custom gray-skinned thigh highs.

Wig - A cheap black wig meant for spiking bought on eBay. It's so cheap, the wefts show through at several points between the spikes - but it's really only visible from the back, and can be camouflaged with a good wig cap.
I'd never had to spike a wig like this before, aside from a less-than-successful attempt at making a Sora wig for a friend. I read up on the techniques required, though, and I think it turned out very well. Lots of got2b Freeze Spray and Spiking Glue was used. Those spikes aren't moving anytime soon. It also helps to rat the hair on the inside of the spike, giving it extra volume and gravity-defying power.

Props - Most Road cosplayers carry Lero, but Road doesn't ever seem to have him when wearing this outfit, so I decided to make some stabby birthday candles instead.
I picked up some LED candles on clearance at Joann's - they had a lifelike silicone 'flame' bulb and a flickering effect, for added realism. I built airdry clay around them to form the pointy shape, making sure I could still pull the candles out the top - so I could get batteries in and out. I also added holes in the back of each to insert clear rods into to make them appear to be floating. Once the clay was dry (it took two stages - one to form the cone, and another to form the 'dripping wax' ), I painted them in bright birthday colors.
I'd love to work out a support system so that I don't have to *hold* the rods, which limits my posing - either some sort of back brace or floor stands. 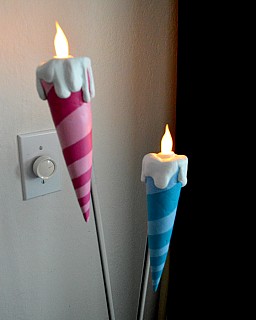 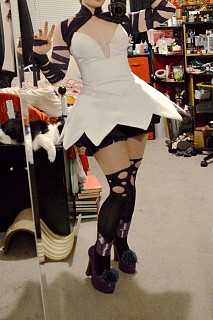 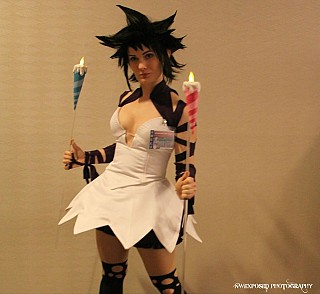