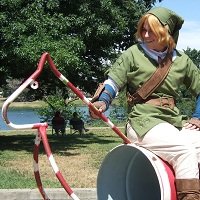 This cosplay nearly killed my machine. I don't know what it is about SeeU, but the total death count for needles is five and pins is -unknown-.

Wig: The wig is from cosplaydna2009. It's not great and has a shine to it, but you get what you paid for. They shipped so fast that it made up for it. Plus, I'm not sure how much I'll be able to use this wig, so it works out just fine.

Ears: The ears were a pair of plastic cat ears I won at my first masquerade (as Taokaka, no less. Darned cat girls XD). I added model magic to the outside to give them more volume and craft foam at the middle to help create that receded look. A pair of head phones were stripped down at added to the ears.

Microphone: Wire and model magic. Needs to be redone so it reaches where it’s supposed to.

Shirt: The main shirt is made of a knit stretch. It’s difficult to explain how I went about making this. I at first made a shirt from a pattern of one of my tank tops, but it was too small. This was eventually used for a partial lining. To make the actual shirt, Taber fitted the fabric to me. The black section is made from an old pleather pirate costume jacket. The collar has interfacing. The sound vibes were painted on with the same paint used for the rest of the costume.

Necktie and disk: The necktie was made from the same fabric as the skirt. It’s one long piece sewn up into a tube with some gold fabric added at the ends and flipped. The disk is an actual Game Cube game, with a piece of sealed and painted craft foam for the play symbol.

Skirt: Followed this tutorial, with the addition of sewing on the golden trim after hemming the bottom edge of the fabric. Unfortunately, the fabric isn’t heavy enough to hold the pleats down without a few stitches; it poofs out like a tutu without them. Much to my dismay. XD

Wrist bangles: Craft foam cones, sealed with modge podge and painted with the same fabric as the rest of the costume.

Stockings: The white stockings were actually tights that I cut and hemmed to the proper height. Taber pinned the gold bias tape (I do not recommend the gold, though. It sheds and frays) to the stockings while I wore them. I sewed that down while stretching out the stockings. They were then sewed onto a pair of sheer tights. The buttons were then carefully glued down with just a dab of hot glue and then sewed on properly later. This sounds so much easier than it actually was.

Shoes: The base shoes were bought from Walmart. I snipped off the weird bow and painted them. By the way, the paint I used to match the fabric was custom mixed by yours truly. It was a painful experience. The red I used had been used on another project and had fabric medium in it.

Shoe decorations: Craft foam, sealed and painted, glued to barrettes that clip onto my shoes. That way I can wear those bright orange shoes anywhere I want without those things! XD 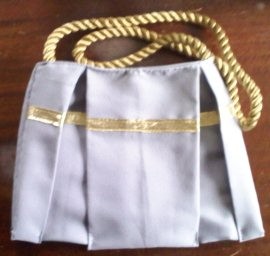 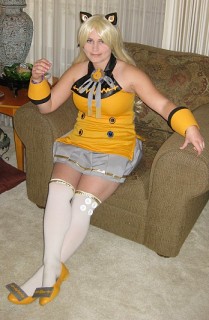