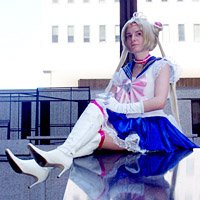 This dress was a disaster. Mostly because it's really impossible to tell how gigantic your baby bump will be so it had to be sewn at the last possible second. It was originally supposed to be velvet, but the cheap crap Joann Fabrics sold me through the internet pretty much shredded, so I had to grab some random knit from my stash. Then my pattern wouldn't work with the new knit, so I had to pull a maternity dress pattern out of my butt by cobbling together the top of an empire waisted dress, the sleeves of a blouse, and pleating a simple a-line. Honestly, it doesn't look bad, but it was a beast to sew in about 3 hours.

The armor is also physically impossible. I tried. Really, but in the end I had to rig a weird elastic set up to hold it and the shoulder pieces on. Those were experiments for me, since I had never worked with WonderFlex before. I am now convinced it is the best thing EVER. I also experimented with Plastidip for the segmented plates, and I will never go back to mod podge again, to hell with the expense.

Moving on... wig isn't quite what I wanted, but I couldn't justify dropping $60 on the wig I wanted when I was going to wear it for maybe 2 hours. So I kidnapped the wig from my Kain and pulled the top back.

The cape was originally silk, and indeed I hand painted the whole darn thing using rice paste as a resist. Then I found out my dye fixative didn't actually affix the dye and had to abandon ship on that idea until I can procure and work with a better set of chemicals. 3 days before the con I was frantically dip dyeing the gradient into a brand new resewn cotton version of the cape and painting on the white pattern. I added the fringe to protect the hem. It can be removed and replaced easily. 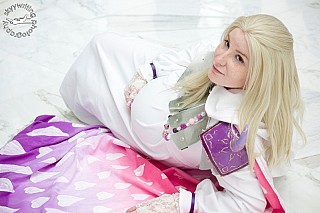 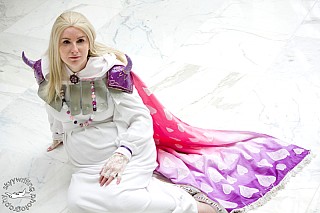 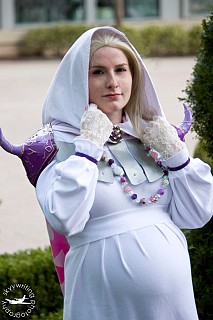 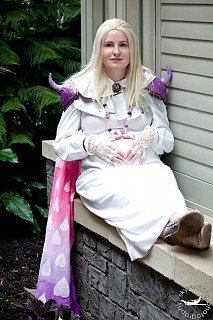 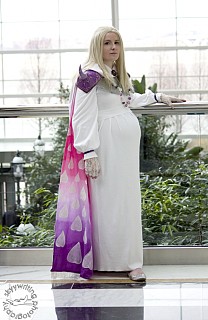 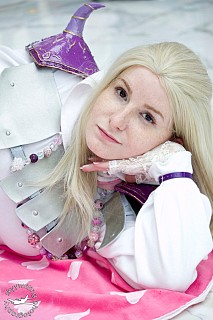 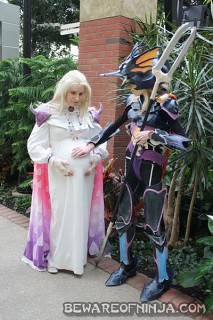 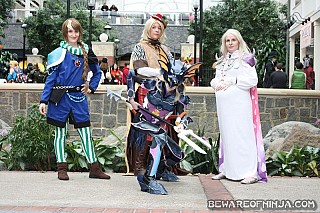 Celine The costume is so creative and pretty. Especially the cape which is simply amazing! So glad I got to see it in person and get a few pics with you. :)