It's NiGHTS - and NiGHTS is awesome! There's a reason why my cosplay handle is based off of this character and the franchise itself. I still remember the first time I played the original game, and the lasting impression it left on me, which in turn inspired me to cosplay the main character. I love how the games focus on the message of overcoming adversity and your fears, and finding your inner courage and confronting your troubles. I do think that the sequel game, Journey of Dreams, gets a bad rep - I personally enjoyed it for what it was and loved the variety of challenges in the different levels. I adore the added details on JoD NiGHTS, and the potential for creativity to be sparked with it! I really love putting a little bit of my own take into costumes when I feel that I can. Thus, this costume was born! And it was a dream come true...no pun intended, really. ;)

This costume felt like it took forever to make. It was very detail heavy and a lot of it had to be custom patterned or worked by hand, so it was very slow progress. It was the costume that never ended. :| And that's saying something, since I've done tutus and other projects that involved a lot of handwork in the past. Every part of this costume was like that, too, right down to the sleeve cuffs!

Bodysuit - for the bodysuit, I used a purple glitter stretch velvet that I happened to randomly come across while in the planning stages for NiGHTS. I wanted this costume to be very detailed and dreamy, and I admit, I wanted an excuse to use this fabric when I saw it. I figured that since NiGHTS is constantly trailing crazy amounts of glittery stars from his hands and is also quite the magical and lively fellow (and throwing glitter about is obviously a terrible idea) that it would be an appropriate fix. :) I used a Kwik Sew unitard style pattern and modded it to exclude a front seam for the upper half and also to have a zipper in the back instead of the front. For the upper half, I used a metallic white spandex that has a beautiful sheen to it, and shelf-lined it in the same fabric. The elaborate detail on the outer side of the legs was done with tiny sequins and beads - I used a variety for diversity, since otherwise it would look far too cramped on the eyes. Making a template took forever, as the sequins are VERY tiny (3MM) and it is a very intricate pattern. I had to put the template on the wrong side of the fabric, since there is no fabric pencil known to man that will work on this velvet without staining it. It was rough at first, but with each repeated symbol it got a bit easier for me. Both were worked as separate 'appliques', sewn on by machine around the edges, then beaded the outer edge on top of the applique edge. The sleeves and collar for the bodysuit are black spandex, with tiny rhinestones and sequins added on to create a galaxy-inspired design. Yet another mostly hidden detail that is there, but you wouldn't know it unless I said something. Since NiGHTS basically has an empty void for a neck and arms, I thought it would be a neat idea to incorporate that into my costume!

Chestpiece - The red diamond was cast out of Alumilite resin - (original idea was clear resin, but that is considerably more heavy) - I made my own prototype to scale with Super Sculpey and sanded it to get it evened out, and made my own mold with Alumilite silicone. I used some metallic powder during the casting process to make it glittery. :D I then decorated the border with gold trim, and attached it with industrial velcro to the bodysuit. In the Archie comics, it is said that the diamond is an Ideya of Courage shard, but that's only speculation and as far as I know, not canon...still something to think about, though!

Headpiece - I constructed the headpiece the same way I did with Harle, only with different 'horns' patterned out and set further back in standard NiGHTS fashion, and with a more appropriate face outline of course. Since NiGHTS does not have a nose, I made it so the center front peak goes over mine, almost all the way down. I had plenty of the batting leftover for the base (which is good because this is really pricey batting that I use for these headpieces!), and stuffed the 'horns' with soft pollyfill. It took an entire bag this time around! I draped the velvet fabric over the form and pinned it close to get my pattern set up. The stripes are sewn on by hand, and they are a darker purple stretch glitter velvet. It took a lot of time to measure them out just right and sew them on. :| The headpiece snaps in the front at the neck and is faced around the edges of the opening and neck. I did some extra embellishment on this part of the costume with beads and sequins. I also made the headpiece so it would be big enough, but not stick out so much that it would annoy other people or bang into things all the time.

Shoes - NiGHTS has very distinctive feet/shoes, so finding a way to get the proper sillouhete and also make them sturdy and able to move in was a big challenge! I ended up using hollow platform sandals on the interior, to give me some added height and lengthen the look of my legs. The soles are thick foam mat material, and the form of the shoes is batting that is interfaced. They are covered in a metallic spandex fabric, in the art the shoes look to be a bit shinier than the bodysuit and a slightly lighter shade of purple is used, as well. They are constructed so I can pull them on, with a sturdy facing at the top so they will stay put.

Vest - this ended up being the hardest part! Honestly, I almost don't even want to talk about it because it was SUCH A PAIN IN THE BUTT. I began with a mock-up to get everything just right. I had to figure in the seams for the pink and red color blocking going on. Because I had to use the same spandex used for the boot covers to maintain consistency, I had to stabilize the fabric with thick duck fabric as a backing. It also helps give the vest a nice shape and stick out like NiGHTS's vest does in the game. I also went mildly crazy adding flair and detail to make the vest less plain, both on the outside and in the lining. I used very tiny sequins for this detailing, filling in the red around the gold stars, and on the pink sections I beaded on little star outlines - it creates a detailed yet still subtle look. The gold stars on the front of the vest are pronged and affixed to the vest. They are meant for leather, but this vest is thick enough to support them and not tear. The gold trim was sewn on by hand, which took forever because the duck fabric and appliqued (thus slightly sticky to put the needle through) spandex were incredibly difficult to put a needle through. Combine that with having to use metallic gold thread to do the job, and you have a nightmare-mode task at hand. I had to use a #16 needle to put this thing through the darn machine when adding the sleeves! The sleeves are part of the vest, I had to make my own pattern for them since the base pattern for the vest was sleeveless, so that was interesting. I also wanted them to be a bit wider than normal sleeves, but not TOO wide. The sleeves feature the same intricate design that is on the outer leg of the bodysuit. I wanted the design to stand out more than in the official art, so I made the colors a much more bold purple. I don't want all of that detail to be lost! I used a purple pearl paint and hologram paint over it for the glitter effect. I beaded around each shape individually the same I did on the legs, too! :) The vest is fully lined in black twill, sleeves and all, which adds to the 'armless' effect. I also sewed on sequin stars on the inner lining, which you can't see unless I showed them to you, but they're there! I actually had to use flower sequins since I couldn't find stars in clear yellow, so I had to cut them up a bit before sewing them on. I think there are around 30 stars in there total. The lining had to be sewn in by hand because of the metallic trim (I had to loop through it all, it was pretty intense). The cuffs are stabilized spandex with more sequined detail added around the purple diamonds. They snap onto the sleeves so they won't be in the way when I'm eating and to give a slightly floating appearance, too.

Collar - this kind of goes along with the vest, but kind of doesn't. Either way, vest and collar were the real challenge with this costume. The collar was pretty difficult to figure out because of the incorporation of the clown ruffle collar on the interior and other strange dynamics going on that were really hard to translate to reality. I used an orange glitter Casa satin for the ruffle, it's 2" wide and about 6 feet went into this one little ruffle! It was hand-tacked to keep the accordian-style look. I made a quick mock-up of the collar and played around with it a bit with the finished ruffle and the vest to get everything figured out. The final version of the collar is spandex with fleece interfacing, lined, and with the gold metallic trim sewn on by hand.


Gloves - Made and patterned them myself out of the same white metallic spandex I used for the upper half of the bodysuit. I have tiny hands, so they were a pain in the butt to make. :| Sandwiching the fabric between stabilizer did help make it a bit easier, though! 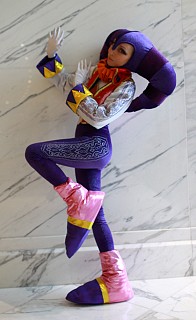 pokoppoki I love NiGHTS! You did a perfect job on making the cosume and being NiGHTS :3