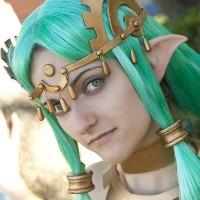 Before reading the Comic or seeing the Movie, I played the Scott Pilgrim VS. The World downloadable video game (from the PS3 network). I immediately fell in love!
With everyone else going crazy over Scott Pilgrim, I decided to jump on the Scott Pilgrim cosplay train!

A few things first about this costume:
1. This is the Ramona Flowers from the PS3 video game!
2. It took alot of courage for me to wear those little pink panties. ALOT of courage! I'm not a huge fan of showing off THAT much of my legs. lol

The costume itself was all store-bought things that I put together.

The goggles, wig, and shoes I bought from Ebay (I buy so much from ebay I don't keep track of which sellers I buy from)
The jacket I got from Target and I added the white stripes to the sleeves. It took me forever to find the "correct" blue!
The pink panties I got from the Cheerleader Company (they sent me a free black undershirt with it, which I thought was pretty cool).
The socks I also bought from Target, in which I added the pink stripes.

The purse was a pain and it looks terrible. I never made a purse before and hopefully I wont ever need to make another one.

I also made my boyfriend a costume for the group; he was Ken Katayanagi. He bought the shoes and jeans and I put together his shirt (using the worst heat-n-bond ever). You can check him out here: http://www.cosplay.com/costume/341950/ 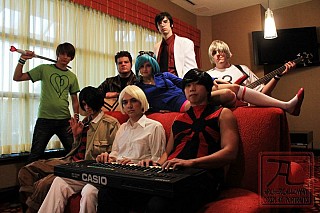 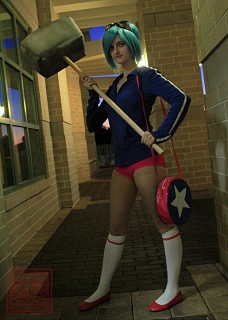 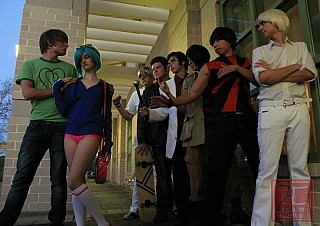