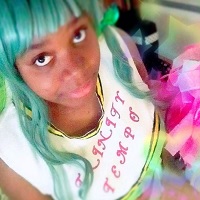 The bottom piece of the character is off color. The jacket was bought in a thrift store and extra fabric was sewn onto the bottom and arms to make the paws. The paws were made out of felt. The tail had a hanger wire to keep its shape. At the time the tail was not finished, so the part that did not have fur was tucked in. The fur was made from a certain type of yarn where it was combed and brushed out with cat brushes. The gray ears were old inuyasha ears, the red ears were fabric. The red ears did not stay but and my hood kept falling down. The gray wig is a giant mess but can be salvaged.
The staff head was constructed from white fabric and was painted on with acrylic paint. The staff was a real tree branch that had long fallen onto the tree. No trees were harmed!
A fish like piece was made for the "zipper" and the fake zipper was made of felt and a sharpie line.
The mask was made of homemade paper mache. The holes were cut out and black (one way- see through) fabric was used. the square chin shape was made of cardboard and paper mache.

Even though I felt like my cosplay was bad.. I still got a lot of praise. I had fun because I was dancing around (even with my oooold brittle bones) People took pictures, gave me hugs, I was even in a video! I loved that year.. it was sad to be lonely but I had fun. 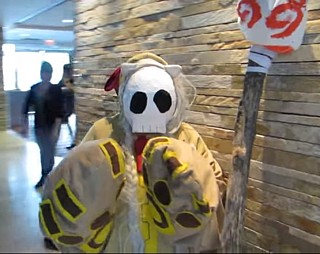 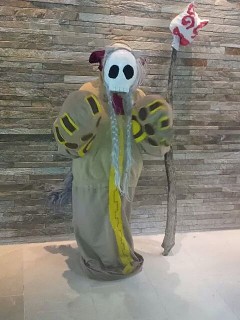