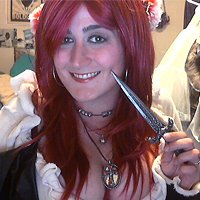 This was a rush job for halloween. It might have been less of a rush if it wasn't a pair. I also had to make my sweetheart's Zidane to match.

They still turned out pretty epic but are incomplete. I'm thinking of taking them to ComiCon next year, if they ever manage to sell tix.

So, The crown is made of model magic and is attached to three hair combs that just slide into my hair. I'd like to cast a resin gem for it someday.

the necklace is ridiculously heavy. It's a big faceted clear gem from the michaels floral department. It's hot glued on the inside to metal ring. The necklace needs embellished on the metal part, where the crown goes.

The dress. Dear lord, the dress. I knew I wouldn't have time to sew a ball gown. I searched thrift stores for weeks trying to find anything that was similar in shape and cut. I had no luck. I gave up. I happened into a thrift store looking for a book and there she was, 40$ and fit me like a glove.

So, There was an odd embellishment on the top that i took off. I took it in about an inch on either side. Then i bought a polyester satin and sewed the overskirt on over top. Had to move my sewing machine to the floor and put it on top of the dress to accomplish that! haha. The overskirt currently goes all the way to the floor like the dress, but i plan on cutting it into the rounded shape.
I then attached the basic shape of the green vines. they still need leaves. I attached the chain around the waist. The danglies on the chain/belt are made of more model magic, hooked together with split rings and hot glue.

I bought a pair of elbow length white gloves. They need to be modified because Garnet's have no fingers. I made the little embellishments for the elbow out of model magic but they didn't stand up to the wear and are trashed.

I need shoes. I wore a pair of white flats. but i'd like a nice pair of satin, low heels for this that i could embellish with vines. 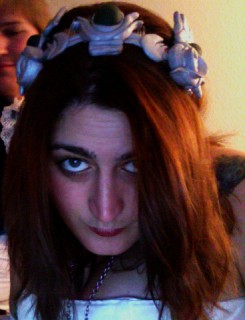